7 ways to protect your cellphone data and mobile privacy 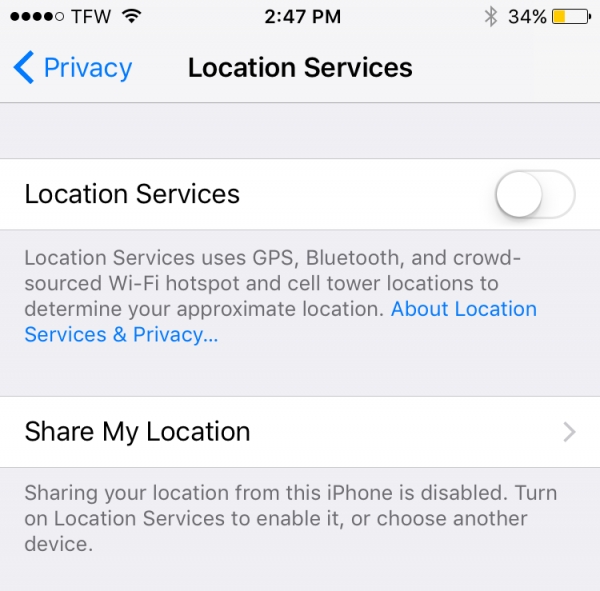 Turning off location services in the privacy settings of your cellphone won't allow law enforcement or the government to pinpoint your exact location. Anthony Varriano screenshot

Timothy Carpenter is alleged to have committed multiple armed robberies in the Midwest from 2010 to 2011, but he was convicted of six robberies because a prosecutor sought and obtained cellphone location data spanning more than five months, placing Carpenter in the area of the crimes.

Currently, law enforcement needs no warrant to view cellphone location data because of the Stored Communications Act, which was supposed to bolster the weak Fourth Amendment when it comes to protecting your data stored online. Only a subpoena and prior notice are required of law enforcement to entice a service provider to disclose the contents of an email or files stored online.

Carpenter’s appeal to three judges of the Sixth Circuit was unsuccessful because Carpenter “had no reasonable expectation of privacy in cellphone location records held by his service provider.” Expect the conservative majority Supreme Court to uphold this decision because you are not required to use a cellphone. You choose to use a cellphone because of how much easier it makes your life. You are not required to store information online. You choose to store information online so you can easily access it from anywhere. Again, you are choosing serenity over security -- publicity over privacy. You are at the discretion of your cellphone carrier when you sign a contract or purchase minutes for your cellphone. It’s no different than signing a contract with an internet service provider who can monitor your online habits and sell that information to advertisers.

Storing data online is a form of publication. Regardless of how you encrypt it or password-protect it, people who want access will get it. There are things you can do to avoid ending up like Carpenter, though.

One of the easiest ways people can gain access to cellphone data is by obtaining a cellphone that unlocks via the fingerprint scanner. Of course, many of the known hacks still require the finger of the cellphone owner to create a mold, but imagine you’re suspected of a crime like Carpenter. All authorities would need to unlock the data on your cellphone is your finger, and courts have repeatedly ruled with law enforcement on this issue.

If you’re dead, whoever wants to access your phone doesn’t even need your permission. Say you recorded video or audio of a murder. The murderer would just need your dead hand to delete the evidence. Determining which of the 10,000 possible combinations your passcode could be would take a lot longer.

A recent review of four smartphones for privacy and security by Gadget Hacks resulted in the Blackphone 2 taking the title as most secure cellphone. Blackphone’s manufacturer Silent Circle offers a year’s worth of encrypted phone calls and messages for free, so not even your carrier can intercept your communications. The phone also warns you when it’s connected to a suspicious cell tower in an attempt to protect your calls and text messages from StingRay surveillance devices used by the government.

What might be the best feature of the Blackphone, though, is the speed in which bugs are fixed. Silent Circle offers up to $1,024 for any bugs found with the phone’s security, and security updates that fix known bugs are released within 72 hours of the bug being discovered. The other three phones reviewed have security patches ready in a month or so.

One of the best ways to protect your mobile data is to delete it if your phone is lost or stolen. With Find My iPhone, you can log on to iCloud and delete your data from any other device. Here’s how you do it on Android devices.

Backup Your Cellphone Data on a Secure Drive

If you want to protect your cellphone data, backing it up to the cloud is pretty oxymoronic. Your backup data should be stored on a secure computer or hard drive that’s encrypted and password-protected. You should keep multiple, encrypted backups as well, in case your computer drive fails.

I cannot stress enough the importance, convenience and sense of security that comes with using a virtual private network. For less than $4 per month, you can dictate the IP address location of all your devices so internet service providers and websites can’t monitor your online habits. This comes in handy when you use public wifi networks at the library, restaurants or even at the office. You’re more likely to come across spies on these networks, but with a VPN, the spies can’t see a thing. It really is worth the money. Plus, you can use a VPN to workaround blackout restrictions so you can watch your favorite baseball team’s games online.

Use Anti-Malware and Antivirus Software on your Cellphone

Unless you’re using an iPhone, you should have some sort of anti-malware and antivirus app on your cellphone. Apple’s iOS is more secure by design, but if you jailbreak your iPhone, you should be using an anti-malware and antivirus app. Over 95 percent of malware attacks were targeting Android devices, so if you use an Android device, it’s critical that you have a line of defense against these attacks. You can even install a firewall to protect your device.

Use a Wifi Calling and Messaging Service

The only downside to not having cellphone data is if you live in a rural area that lacks public wifi networks. It makes it hard to send and receive calls and messages if you’re rarely around a wifi. If you rely on your cellphone as a GPS while driving, you’ll sacrifice that convenience, but we’ve managed to find our way with maps and atlases for centuries.

So there’s seven ways to protect your cellphone data. Take advantage of all of them so you don’t end up like Timothy Carpenter, whether you’re guilty or not.

If you like this, you might like these Genesis Communications Network talk shows: The Tech Night Owl, Free Talk Live, The Dr. Katherine Albrecht Show, Erskine Overnight, Home Talk, The Josh Tolley Show, The Tom Chenault Show

More in this category: « Her Opponent - a gender reversing restaging of the 2016 Presidential debates Drug Using Marijuana Chemical Found to Reduce Seizures in Epileptic Children »
back to top