Her Opponent - a gender reversing restaging of the 2016 Presidential debates 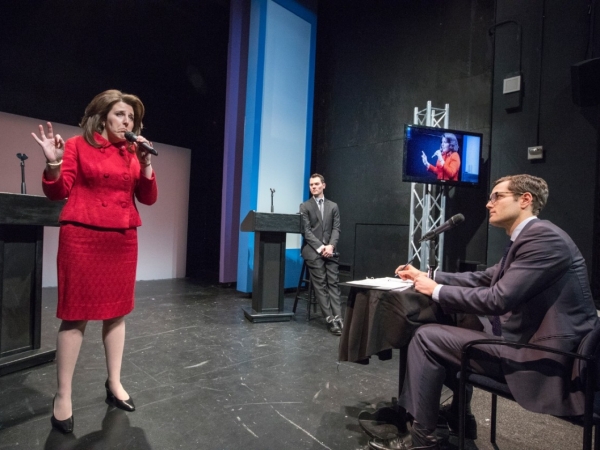 A few months ago I read about the play, Her Opponent, and quickly dismissed it as “preaching to the choir.” For those who have not heard of it -- Maria Guadalupe, an associate professor of economics and political science at INSEAD came up with an idea to restage sections off all three Presidential debates with a gender reversing twist -- by casting a female actor (Rachel Whorton) as the Trump character “Brenda King,” and a male actor, Daryl Embry to play the Clinton character, “Jonathan Gordon.”

The actors would learn the exact dialog, phrasing, gestures and movements of their real life counterpart candidate as each appeared in the live 2016 debates. An actor, Andy Wagner, would take part as the moderator as well. The idea was to restage the debates as close to reality as possible. The debate script was taken verbatim from the live telecast -- making no changes to the words with the exception of a few verb adjustments to avoid gender confusion. Even the renames of the characters have the exact same syllables, so the actors, during the staged debate, could keep the same beats as the real life candidates.

And why do this? Well, the liberal producer, director, cast, crew and facility who put Her Opponent together all reasonably assumed that switching the gender roles would confirm what all we lefty liberals knew from day one -- Trump is an aggressive asshat and will be equally intolerable as woman, and Clinton’s “crushing it” experience will shine through even more so, dare I say, coming from a man.

So I ignored Her Opponent as a silly concept play because it’s “dog bites man.” It’s obvious, commonplace and it’s not newsworthy. Instead we should be looking for “man bites dog,” which is shocking -- and therefore compelling news!

So, it was with great “eye rolling trepidation” that I finally watched the rehearsal tapes as well as several minutes of footage from the thirty minute play, Her Opponent.  My ideas were, pretty much, confirmed.

A female version of Donald Trump is still a hateful buffoon.

Er, expect that -- um -- you know that’s not what happened at all, right? Liberal audiences, pretty much, universally liked (female) Trump and hated (male) Clinton!

*Sigh*  I know. Her Opponent is totally man bites dog. I was wrong. The above is my liberal wishful thinking. That being said:

It’s very true that during its two performance run, liberal audiences were fucking shocked at how much they hated the Jonathan Gordon / male Clinton character calling him, “very punchable.” There was even one poor liberal chap who could not believe how much he respected the female Trump and literally held his head in his hands while his date rubbed his back in comfort. By comparison the female Trump was praised for her strength with liberal audiences saying how much they loved seeing that character, “attacking, endlessly attacking and never giving up.”

Basically, Trump’s debate technique, his aggressive forwardness and the simplicity of his repeated messages became much easier for liberal folks to tolerate when it came from a woman.

Wow. Ouch! Seriously, man, how did this all happen?

Well, Maria Guadalupe (producer), hired director Joe Salvatore, a Steinhardt clinical associate professor of educational theatre who specializes in ethnodrama -- a method of adapting interviews, field notes, journal entries, and other print and media artifacts into a script to be performed as a play. And they put it all together. Their original goal? From the Her Opponent website:

“Can experiencing what the 2016 U.S. presidential candidates said and how they said it through gender-reversed characters, cause us to revisit our own biases and develop insights from different perspectives?

Her Opponent uses documentary theatre techniques to re-create excerpts of the three 2016 presidential debates. An actor performs the text, gestures, and movements of Hillary Clinton, but as a male Democratic candidate named Jonathan Gordon and an actress performs the text, gestures, and movements of Donald Trump, but as a female Republican candidate named Brenda King. A third actor plays the role of The Moderator from each of the three debates.

The experience includes an opportunity for audiences to share their thoughts and impressions in a facilitated discussion that immediately follows the performance.”

The actors rehearsed first by listening to audio of the debates until they memorized the selected script. Then they delved into the debate video to mimic all aspect of their candidate's physical performances. It’s not so much great acting as it is great mimicry. This video has a back and forth comparison between the actors in rehearsal and the actual candidate debate: The SJW View: Gender Swapped, Trump and Clinton Debate. If you watch the back and forth you’ll see what I’m talking about -- acting vs. mimicry -- there are plenty of times when the actors get the hand motions right but miss the sincerity of what the candidate is saying (especially the Gordon / Clinton character). Of course, that is only a rehearsal and not the actual show. So, keep that in mind.

Her Opponent, had two sold out performances so there has not been a lot of national coverage but I suspect the show will get picked up off Broadway and will continue its run with the same cast. NYU has a great (several page) story about the original two night performance: What if Donald Trump and Hillary Clinton had swapped genders?

MSNBC has a nice eight minute piece about it as well: Debate and Switch -- where the director and three actors weigh in on the production and the aftermath.

Conservatives sites and vlog’s, as you can imagine, had a field day when they heard about the Her Opponent audience response. I don’t think it’s the slam dunk they proclaim -- Tucker Carlson’s: If Trump Were a Woman - Liberals re-create Trump/Clinton debate and it BACKFIRES. (Note: most of that video is a repeat of the rehearsal footage).

I think the word, “backfires” is a bit of a stretch. Don’t get me wrong. I find the reaction to the play fascinating, sincere and totally believable. And it certainly says -- something. I’m not one hundred percent convinced it’s the colossal backfire that Mr. Carlson claims. I mean, it’s very true that liberals are usually smug. I know what I’m talking about here. I’ve been a smug liberal for twenty something years.

But after working on dozens of conservative radio programs I've warmed up to a more centrist view. And now I really notice the smugness of the left (even when I agree with them). But to be fair -- I also notice the insincere piety of the right. Both sides have serious credibility issues as far as I’m concerned.

Her Opponent is a great experimental idea and probably makes very fine points about gender bias (I have yet to see the full production) but it does have an elephant in the room. First of all, yes, perhaps some liberals will learn a valuable lesson from watching the show. And yes, conservatives have a right to mock them about something they found to be so, so obvious. But, even if two people, one male and one female, are using the exact same language, gestures and movement to express the exact same thing -- there is a huge, gigantic, vast difference between the following two scenarios:

One of those scenarios carries the full weight of thousands of years of the oppressive, abusive, murderous, terrifying history of male violence against women, on its shoulders. The other is scenario two.

So, again, Her Opponent is interesting and it might have important things to say about gender bias -- but if you honestly don’t understand the difference between scenario one and scenario two.

Well, then you don’t.

But it's the reason why President Donald Trump is a dick.

If you like this, you might like these Genesis Communications Network talk shows: Americanuck Radio, Free Talk Live, Flow of Wisdom, America’s First News, America Tonight, Bill Martinez Live, The Real Side, World Crisis Radio, The Dr. Katherine Albrecht Show

More in this category: « The Enemy Within Blows Their Cover Once Again 7 ways to protect your cellphone data and mobile privacy »
back to top