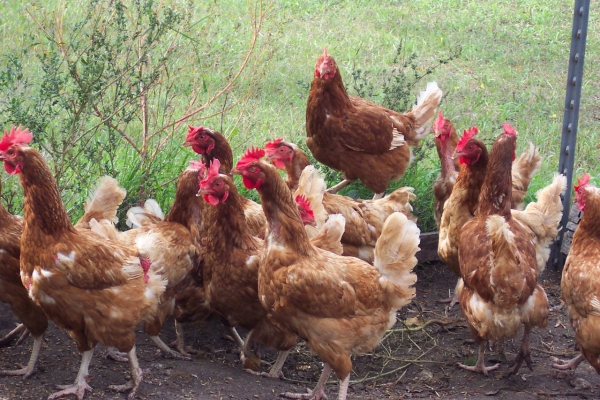 Poultry poop is hormone-rich and a leading contributor of estrogen and carcinogens in our food. Adobe Stock Image

Estrogen can be dangerous stuff. Sure, it’s an important hormone responsible for the development of the fetus in the womb, the growth of connective tissue and the development of female sexual characteristics, and it’s the most ancient of all of our hormones (it’s been around for 450 million years). But it’s also associated with a wide range of health problems including fibroids, weight gain and cancers. It is pro-inflammatory, it initiates the production of stress chemicals, and it’s linked to various cancers, including breast, uterine, colon and prostate.

Even worse, there are certain chemicals, natural and synthetic that, while not exactly estrogen, can act like it, throwing off the delicate balance of the body’s endogenous hormones. These so called ‘estrogen mimics’ or non-biological estrogen-like substances called xeno-estrogens (xeno meaning “foreign”)  include birth control pills, hormone replacement therapy (HRT) and fertilizers and pesticides, all of which have estrogen or estrogen-like activity and whose levels have increased dramatically in our environment over the last 60 or 70 years.

One of the most significant causes of xeno-estrogen exposure occurs through foods. Over the past 60 or so years the FDA has approved xeno-estrogenic substances for use in livestock. That’s because estrogen is a growth substance and is used to fatten farm animals. It increases the animals’ growth rate and the efficiency by which they convert the feed they eat into muscle.

Traditionally this has typically been a problem associated with livestock such as cattle and poultry. Recently, however, a new source of xeno-estrogens in food has entered the marketplace: farmed fish. These fish are not only exposed to the hormone via toxic water, which has been saturated with the potent biochemical from agricultural runoff, but they have also been intentionally dosed with the hormone. For years, this chemical manipulation was restricted to countries in Asia know for their lax regulations. However, in the past few years even European and Scandinavian countries have become participants in the chemical control of aquaculture.

One of the main reasons for this hormonal manipulation is deliberate gender reversal; scientists are intentionally turning male fish into females by dosing them with estrogen. This practice, which scientists call “Controlled Reproductive Biotechnology,” is a common practice because in certain species, one gender or another tends to be larger. According to foodforbreastcancer.com, tilapia and halibut are especially subjected to this kind of hormonal treatment.

Animal waste is also a significant source of xeno-estrogen. Animal waste may contribute an estimated 90 percent of total estrogen in the environment. Five gallons of runoff water contaminated with chicken manure may contain a birth control pill’s worth of estrogen.

Estrogen levels in poultry litter are so high that when farmers feed chicken manure to their animals to save on feed costs, it may trigger premature development. Poultry manure is among the highest hormone content, quadruple the total estrogen, and nine times more 17-beta estradiol, the most potent estrogen and a “complete” carcinogen, as it exerts both tumor initiating and tumor promoting effects.

If you’re concerned about exposure to xeno-estrogens here are five ways to reduce toxicity:

More in this category: « The many uses of activated charcoal Opinion: America leaving Paris Agreement does not make America great »
back to top