Delusion Or Common Sense In The Middle East? 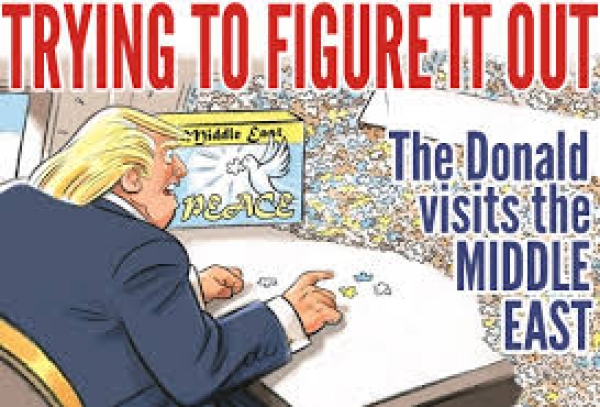 President Trump has just returned from a whirlwind trip to the Middle East. And he has vowed to keep a continuing and aggressive U.S. presence where American soldiers are fighting in Iraq, Afghanistan, Syria, Kuwait, Bahrain, Turkey, and other states ringing America’s Middle Eastern battlefields. But is Trump, like his predecessors, becoming engulfed into conflicts that never end?

One of the joys in my college years was to study English literature at Cambridge University in the early 1960s. Nobel prize author and poet Rudyard Kipling was an early favorite. He did not bog down the reader with dense symbolism and complexity. He was easy to understand.  Born in India, Kipling was tagged as the “Poet of the British Empire.” It just might be a good idea for Republicans and Democrats, who fall over themselves espousing America’s continuing role in the Middle East, to take a breather and read a little Kipling.

“Oh, East is East, and West is West, and never the twain shall meet,

Kipling expressed his concerns of imperialism in his book, “The Man Who Would Be King,” which was made into one of my favorite movies. In it, Sean Connery loses his head attempting to bring his western values to a remote mountain vastness called Kafiristan. Michael Caine is left alive to crawl back to civilization and bring the message to the West — “Quit trying to convert and save us” in the Middle East.

America has commanded a major presence throughout the Middle East for the past 60 years for one major reason. No, a singular reason -- oil. It was in our economic interest to remake the Muslim world by the B and B method. Bribing and Bombing. In the 1980s, U.S. interests were served by pouring money and weapons into Afghanistan in support of Islamic radicals who were trying to expel the Russians. Then our one time allies turned on us, the initial seeds of al-Qaeda were sown, and America has been in a quagmire ever since.

In the last decade, we plunged into Iraq, where there was initially only a minor al-Qaeda presence. But the quixotic U.S. invasion poured gasoline onto the anti U.S. fire, causing the death of some 6700 American soldiers, leaving a country in shambles, with not one barrel of oil confiscated in this wasted effort. Then it was on to Afghanistan, and again, for no apparent reason.  (But al-Qaeda is lurking!)  Osama bin Laden is dead but his effort to bog down the U.S. in endless Middle East wars is right on target.

“Washington’s assaults on seven countries have blown up weddings, funerals, kids’ soccer games, farm houses, hospitals, aid workers, schools, people walking along the streets, village elders, but the Muslims don’t mind! They understand that the well-meaning Americans, who love them and are committed to their human rights, are bringing them democracy and women’s rights. The million or more dead, maimed, and displaced Muslims are a low price to be paid for liberation by Washington.”

Do you catch his sarcasm? The Middle East has been in turmoil for over 2000 years. And just about everyone has attempted to control this part of the world over the course of history. The Egyptians, Turks, Jews, Romans, Arabs, Persians, Europeans…the list goes on — none with any degree of long-term success.

From all this turmoil, there are lessons to be learned, especially for America and the new Trump Administration.  First, make a massive effort to become independent of Middle Eastern oil. Second, read more Kipling. In his novel, “The Naulahka”, Kipling writes:

“And the end of the fight is a tombstone white with the name of the late deceased,

“And the epitaph drear: ‘A Fool lies here who tried to hustle the East.'”

More in this category: « A sports fan's guide to cheap TV Medical Students Find and Fix Flaw in Impaired Driver Testing for Marijuana »
back to top