Trump Agrees to Deal (and with all this, I wonder if Pelosi actually does have the power to prevent the President from delivering a SOTU address in House Chambers) 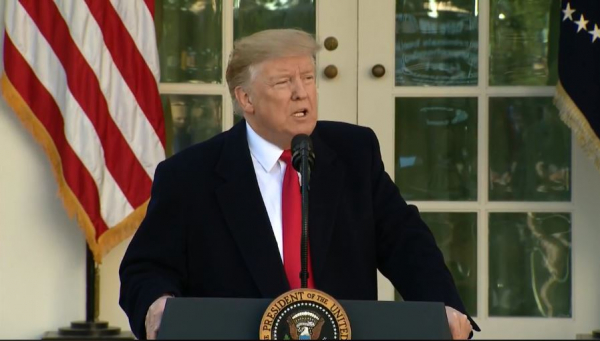 There will be a temporary deal to open parts of the government for a few weeks, mainly for critical issues. Of course, there will be no wall. Which is fine. Walls are medieval and not terribly effective, but whatever. There will be; however, additional money to increase the current level of fencing and assist with said fence repair costs (about $1 billion). There will also be some back pay available to specific workers (but as far as I can tell - as of yet, it’s unnamed as to which workers will receive back pay and which will not). And, I guess, finally there will be a State of the Union.

And it’s this last point that makes me go, “Hrmmmmm.” (Just like in the old Arsenio days). A few days ago when the President announced he won’t have a State of the Union until after the shutdown ends. BUT it is also clear that Nancy Pelosi kind of .. uninvited him from delivering the State of the Union in the House chambers.

And then, Trump agreed to delay with this Tweet:

“As the Shutdown was going on, Nancy Pelosi asked me to give the State of the Union Address. I agreed. She then changed her mind because of the Shutdown, suggesting a later date. This is her prerogative — I will do the Address when the Shutdown is over. I am not looking for alternative venue for the SOTU Address because there is no venue that can compete with the history, tradition and importance of the House Chamber. I look forward to giving a “great” State of the Union Address in the near future!”

Okay. This immediately made me wonder, “Wait. Is it actually her prerogative?” I mean, obviously, she does not, nor did she ever say she was denying the President to have a State of the Union - she is denying him use of House Chambers. Um, okay. But aside from that - so what? Can Nancy Pelosi deny him use of House chambers? Can the Speaker, actually do that? I’m honestly not sure. I read over lots of online sources today from CNN, to the NYT and Fox News and all of them keep mentioning “according to House Rules,” but none of them linked to any House Rules.

And then I found the House Rules. And now I know why no one linked to them, because it’s a nightmare 50+ pages of tightly fonted legalese. Ugh. It’s bloody painful to read. And confusing. Anyway. Let me dive into it.

First, let’s check the Constitution and see what it says about a “State of the Union:”

“The President shall from time to time give to the Congress Information of the State of the Union, and recommend to their Consideration such Measures as he shall judge necessary and expedient; he may, on extraordinary Occasions, convene both Houses, or either of them, and in Case of Disagreement between them, with Respect to the Time of Adjournment, he may adjourn them to such Time as he shall think proper; he shall receive Ambassadors and other public Ministers; he shall take Care that the Laws be faithfully executed, and shall Commission all the Officers of the United States.”

The key phrase seems to be my emphasized, “convene both Houses, or either of them.” Convene, as you may or may not know means, “come or bring together for a meeting or activity; assemble. Summon. Order.” In other words, the President may “summon/order” either or both houses to a State of the Union.

As far as I’ve been able to determine the answer is very clearly - no. But the Speaker DOES have a lot of power over what can and can not happen on the floor of House chambers. You see, not just anyone can walk onto the House floor and have a speaking role. That privilege is restricted to the usual suspects one would assume - current members of Congress, House staffers, invited VIPs, dignitaries, ambassadors, delegates, etc. and, of course, the President / Vice President. Former members of Congress and former Presidents may also enter the House chamber and deliver speeches, if invited.

So, the Speaker can’t prevent an acting President from entering House chambers BUT according to House Rules, and as much as I understand the 50 pages of legalese I just waded through, a Speaker is, in fact, in charge of several key House chamber factors including (but not limited to):

“Use and Admittance. 1. The Hall of the House shall be used only for the legislative business of the House and for caucus and conference meetings of its Members, except when the House agrees to take part in any ceremonies to be observed therein.”

Okay, fair enough. So, it’s possible the Speaker can just decide  to not agree to take part in the State of the Union, and if the Speaker decides this, congress will not attend. And if congress does not attend,  then the chamber is technically not “in session,” and can not be used.

Does this supersede the Constitution’s statement that the President may “convene both houses?” Maybe. Maybe not. I guess it’s all debatable, but even if the President could order congress into session for the State of the Union, I did find a couple of picky (perhaps juvenile) things a Speaker could do to make the State of the Union, (if held in House chambers) a disaster. For example, according to House Rules:

“BROADCASTING THE HOUSE. 1. The Speaker shall administer, direct, and control a system for closed circuit viewing of floor proceedings of the House in the offices of all Members, Delegates, the Resident Commissioner, and committees and in such other places in the Capitol and the House Office Buildings as the Speaker considers appropriate. Such system may include other communications functions as the Speaker considers appropriate. Any such communications shall be subject to rules and regulations issued by the Speaker.

This all means the Speaker of the House could order all close circuit cameras turned off so the speech wouldn’t be broadcast to anyone in the building. AND the Speaker could order that no cameras or press would be allowed onto the floor (although, I believe that currently only C-SPAN is allowed on the House floor). So, sure, the President could still deliver the State of the Union, but the Speaker could make sure that no one ever heard it or recorded it. In fact, it sounds as if the Speaker could, literally, order the lights shut off. So the President would have to deliver the speech in the dark, to no one. And this all may be juvenile tactics but “juvenile tactics” seem to be the ways and means of politics in the last several years.

Anyway, I’ll leave it up to you to further dig through the House Rules for more information because that is some sucky reading, let me tell you (and I’m done with it).

Finally, and again, I am not suggesting that House Rules should always supersede the Constitution. I am only suggesting there does appear to be clear reasons why a Speaker of the House can make a State of the Union, at best - difficult, assuming the President decides to address the nation in House chambers.

A Speaker of the House, obviously, can not stop the President from delivering the address elsewhere, or to Congress or directly to CNN or Fox News or, in the probably case of our current President - on Twitter.

More in this category: « Opinion: Cohen's 3 year sentence and the Little "Witch Hunt" That Could! Another New Year, Same Old Midwest Freeze »
back to top