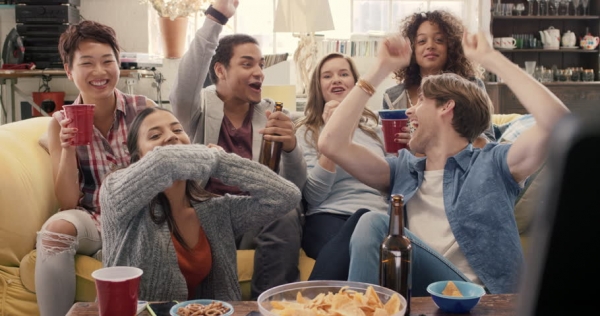 You can cut your TV and internet bills in half and still watch the sports you love. Shutterstock Stock Image

If you’re a sports fan, you probably feel like you must watch your favorite team play almost every game of the season. That means you’re likely paying hundreds of dollars for cable or satellite service every month. Service in my area runs from $109 per month to $170 per month because I have to purchase almost 200 channels I won’t watch just to get my regional sports channel.

Just because we’re sports fan doesn’t mean we should let cable and satellite service providers take advantage of us, though. You can watch almost every game your favorite baseball team team plays, whether you’re in their area or not, as well as NFL regular season and playoff games, MLB, NBA and NHL playoff games, and NCAA men’s basketball tournament games for less than $55 per month. And that includes your internet bill! Here’s how:

Buy the Right TV Antenna for Your Area

Getting your sports fix all starts with the right TV antenna for your area. Do some research to determine where the television broadcast towers are near you. If you live in rural America, a traditional antenna mounted to the roof of your home would be best. These have a range of up to 150 miles and are still very affordable, with options under $40. Here are some options compared.

If you live near a city you can save a few dollars and some installation hassles by purchasing a 25-mile or 50-mile, indoor antenna. I bought a 50-mile, indoor antenna that I stuck to a wall in my apartment and receive more than 40 channels, most of which display in perfect HD. This cost me less than $25 and took less than 10 minutes to find the best location for the antenna. That’s a one time cost to watch every NFL playoff game, including the Super Bowl, every MLB playoff game, including the World Series, every Stanley Cup Finals and NBA Finals game, and select NCAA men’s basketball tournament games -- all in stunning HD -- for as long as you or the antenna lives.

Invest in Internet and Protect Yourself with a VPN

You can save a ton of money on television by investing in your internet connection, and I’m not talking about paying for the highest bandwidth. You only need a 15 to 20 mbps download speed to stream 4K UHD video, so anything more than that is overkill, unless you’re downloading a lot of media. Regardless, you should protect your online history with a virtual private network (VPN).

A VPN shields your IP address location from internet service providers and other spying eyes. You can change the perceived location of your IP address to anywhere in the world, which allows you access to foreign versions of Netflix and other streaming software. You can even use the VPN on other devices like your phone or tablet. The best part is, a VPN subscription runs around $5 per month or less, and allows you to get around MLB.TV’s blackout restriction.

Using a VPN to Get Your Local MLB Team’s Games

The real trouble with watching your local team on your HDTV is that you can’t run your VPN on your TV. You can run an HDMI cable from your computer to your TV, but why use two devices to watch TV when you could use one?

Run Your VPN Through a Wireless Router

There are certain routers that allow for open-source, firmware installations that will allow you to shield the IP addresses of your entire network of devices. Then, when you connect your smart TV to the internet, it will take on the location you set using your VPN through your router’s client software. This will allow you to utilize the MLB.TV and NHL.TV apps on your TV or Roku device instead of connecting your computer to your TV every time the game is on.

If you’re willing to take the time and want to save a few dollars, a good place to start is by reading the forums at the DD-WRT and Tomato links provided above. I would suggest buying a router with open-source firmware pre-installed, though. Finding a router that’s compatible with DD-WRT or Tomato is harder than you’d think. While model numbers are printed on the router box, version numbers are not, so when you see a model number that’s the same as one that’s compatible, that doesn’t mean it’s necessarily compatible.

The savings are worth the struggle, though. You could save $700 per year or more by cutting cable and employing these methods. Here’s a breakdown of what you'll spend and save by investing in a digital antenna and VPN compared to cable and satellite providers:

With NHL.TV = $67.76 per month during hockey/baseball season (roughly two months)

With NHL.TV = $56.82 per month during hockey season (roughly six months)

The Xfinity Double Play is the cheapest cable or satellite option in my area that includes my regional sports channel. That runs about $109 per month after tax for the first 12 months, or $1,308 for the first year, and a lot more after that. So without NHL.TV I’d save $712.52 annually. With NHL.TV, I’d save $558.28 each year. I’m either saving 54 percent or 43 percent on my TV and Internet bills, and the only games I wouldn't get are those on ESPN and NBCSN.

So just because you’re a sports fan doesn’t mean you have to pay for cable or satellite service. You can save a ton of money on your TV and Internet bill just by taking these few, easy steps. The best investment you can make is in your internet service and the cheapest investment you can make is in a VPN. Don't let increasing cable and satellite costs make you sacrifice your love of sports. Force the cable and satellite companies to be more competitive with other options by using those options.

There will be quite a bit of bandwidth lost due to the VPN running on your router, but it should still be fast enough to stream HD video.

Don’t expect this workaround to work forever, but take advantage of it while you can.

If you like this, you might like these Genesis Communications Network talk shows: The Tech Night Owl, Free Talk Live, The Dr. Katherine Albrecht Show, Erskine Overnight, Home Talk, The Josh Tolley Show, The Tom Chenault Show, View From The Couch

More in this category: « Check thyroid health with the Basal Thermometer Test Delusion Or Common Sense In The Middle East? »
back to top