Doubleheader Discounts: Rainouts help you save money at the ballpark 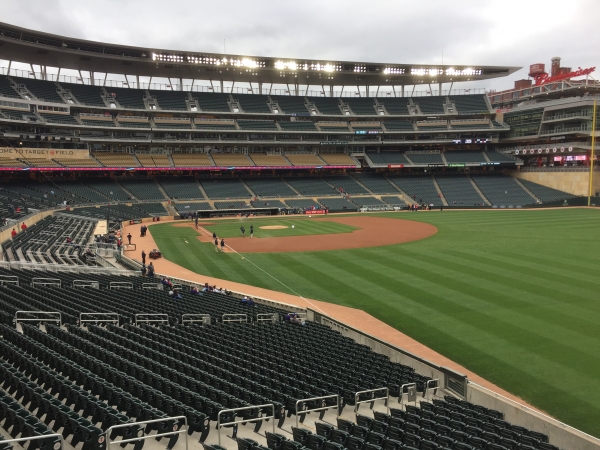 There were plenty of open seats at game two of the Minnesota Twins' doubleheader at Target Field on Thursday. Anthony Varriano photo

It’s no secret that attending a Major League Baseball game is expensive despite being the cheapest option ($31) when compared to the NBA ($55.88), NHL ($62.18) and NFL ($92.98). I’ve been to 16 of the first 24 Minnesota Twins home games, but just experienced my first pair of doubleheaders over the last four days -- one a split doubleheader and one a traditional back-to-back. I doubt I’ll see many more split doubleheaders, as taking a break between games tends to leave seats empty during the second game.

Getting into the ballpark isn’t prohibitively expensive. You can get into Angels Stadium in Anaheim for less than $10, and standing room only tickets at Target Field in Minnesota are usually $11. But eating and drinking beer, liquor, soda or water at the the ballpark is expensive.

The Boston Red Sox, Chicago Cubs and Philadelphia Phillies have the most expensive beer in baseball, followed by Minnesota in second, according to Fortune. That doesn’t include tip. My research revealed that you can buy 16 ounces of Bud Light, Miller Lite or a Bud Lime-A-Rita for $7 at Target Field. You can expect to pay close to $5 for a water and more for soda.

Doubleheaders don’t have to be doubly expensive, though. I enjoyed two games, a meal and three drinks for less than $35. Here’s how you can save money at the ballpark.

Don’t Exchange Your Ticket for a Different Game

When your game gets rained out, don’t exchange your ticket for a different game. Generally, if you have tickets to the makeup game, you’ll get free admittance to the second game of the traditional doubleheader. That’s not the case for split doubleheaders, though. Do your best to make it to the makeup game because they tend to be attended by fewer people, making for a more intimate game, shorter lines for the concession stands and bathrooms, and you’re more likely to get a foul ball, an autograph, or a chance to meet Tony Oliva, which happened to me Thursday.

You’re also more likely to win something if you attend the second game of a doubleheader. Professional sports organizations give away free stuff every game. At Minnesota Twins games, the big winners are those who get scratch-off tickets from the Minnesota Lottery. But there’s plenty of other door prizes to be had. I won a large, two-topping pizza from Papa John’s on Thursday.

The organization will say you can exchange your ticket for a ticket of equal value for another game, but equal value is what they declare, and face value of tickets changes depending on demand. So, if you have a ticket to see the last-place Royals play the Twins and exchange it for a game against the Yankees or Red Sox, don’t expect to get the same seats or even the same section. You are at the discretion of the corporation at that point, and you never want to be in that position.

Although you’ll spend a few more minutes in the security line on your way into the ballpark, the wait is negligible when considering the value of having a bag with you at the ballpark, especially during a doubleheader. I take my laptop to the game in case I want to work (like I am now), a microphone in case I want to do a live broadcast (I do live, uncensored play-by-play of select games), a solar charger for my phone and computer and my preferred scorecard and pens to keep score.

I recommend taking a backpack to the ballpark as opposed to a satchel or purse. Your lower back will thank me if you do a lot of walking to or around the ballpark, as side-swinging bags tend to cause more back and hip pain. Backpacks also have plenty of hidden pockets, and security guards aren’t going to take the time to investigate every interior pocket, which brings me to my next point.

Beer is the biggest ripoff at the ballpark. While you’re getting 20 ounces of beer for around $8 at Target Field, you can get a hefty shot of liquor for $9 that will pack a bigger punch. My biggest suggestion is to not drink beer at the ballpark, and you can avoid doing so by packing your own booze.

While outside liquor is not allowed at any ballpark, I say you risk it. The worst that could happen is security discovers your stash and throws it out, but it’s highly unlikely if you use a backpack. You can use those interior pockets of your backpack to sneak in a flask of liquor. You generally won’t have to worry about your bag being scanned for metal, so your flask doesn’t have to be plastic unless you’re keeping it on your person. I forgot to finish all the water in my water bottle before entering Target Field on Sunday, and the security guard didn’t even take notice. That could have been filled with vodka, as it was visible on the outside of my pack. If you’re using interior pockets, though, you can bring in anything you want, including a pre-mixed cocktail. Just don’t drink too much or give your fellow fans a reason to have you removed.

Pack a Lunch and a Water Bottle

You can bring your own food to the ballpark, so you never have to spend money on peanuts, sunflower seeds or hot dogs (unless it’s $1 dog day at Target Field). I usually pack a snack for every game, but for doubleheaders, I pack a cold lunch like a protein-rich sandwich.

You’ll burn a lot of calories and give your legs a workout just walking to and from the ballpark and your seat, and you’ll most likely sweat, so having a water bottle will allow you to take advantage of the free tap water at the ballpark instead of paying nearly $5 for bottled water.

If you fail to pack a lunch and/or liquor, I suggest getting both in one drink. Most ballpark bars will make you a Bloody Mary with a few fixings like olives, celery, a pickle and, perhaps, beef sticks and cheese. The Twins offer a Bloody Mary with either a cheeseburger slider or slice of pizza at Hrbeck’s Bar for $24, and it will fill you up thanks to an eight-ounce, Bud Light beer back.

If you don’t drink Bloody Marys, order liquor on the rocks. It’s the best deal you’ll get at the ballpark, especially if you order doubles. Bartenders tend to pour heavy drinks (about three full shots) when you order doubles, which run around $15 for bottom shelf liquor before tip. The more games you attend the better you’ll get to know the bartenders, and them you, so despite the expensive price I recommend you tip your bartenders. They’ll remember it, even if you don’t tip 20 percent. I do a dollar per shot as a base and go up from there.

If you intend to eat at the ballpark, try these recommended dishes so you know you’re at least getting something unique or well-received for the insane amount of money you’ll spend.

The easiest way to avoid overpaying to see a baseball game or doubleheader is to not pay for parking. The closest parking garage near Target Field costs up to $25 for event parking and the most expensive parking in baseball is in Boston and New York for $35.

If you don’t live near public transit or need your car after the game, use apps like Park Whiz or Best Parking to score cheap deals on parking. I can park half a mile from Target Field for $6 during every night game, and a few blocks further away I can score parking for $4. I’ve parked for free at public parks and walked 25 minutes each way as well. If I pack my bike in the trunk of my car, I can cut my time to the ballpark down to 10 minutes or less and lock it up at one of the many bike racks available right outside the ballpark.

Taking public transit is my favorite way to get to and from the ballpark, though. For $3.50 I can get dropped off right at the ballpark and returned a block away from my apartment. I can read or work on the way to or from the game instead of driving, so I can actually make money during my commute. It’s also safer than driving, and if I want, I can take in a few drinks at a nearby bar before boarding.

My entire day for two games at Target Field on Sunday cost me a total of $29. Since I purchased the Spring Ballpark Pass for every home game except Opening Day for $99 in advance, my average price per ticket was $6.60 and will continue to fall for each game I intend through May (six more games brings it down to $4.71 each). If you buy tickets to the rainout, you got a free ticket to the second game of the doubleheader, so that’s $11 for both games at Target Field. Add a double (really a triple) bourbon on the rocks for $17 including tip, and I’m right around $30 and you’re under $30. My transportation puts my total at less than $35, and if you don’t pay for parking or are willing to do some walking, and now you can save money at the ballpark, too.