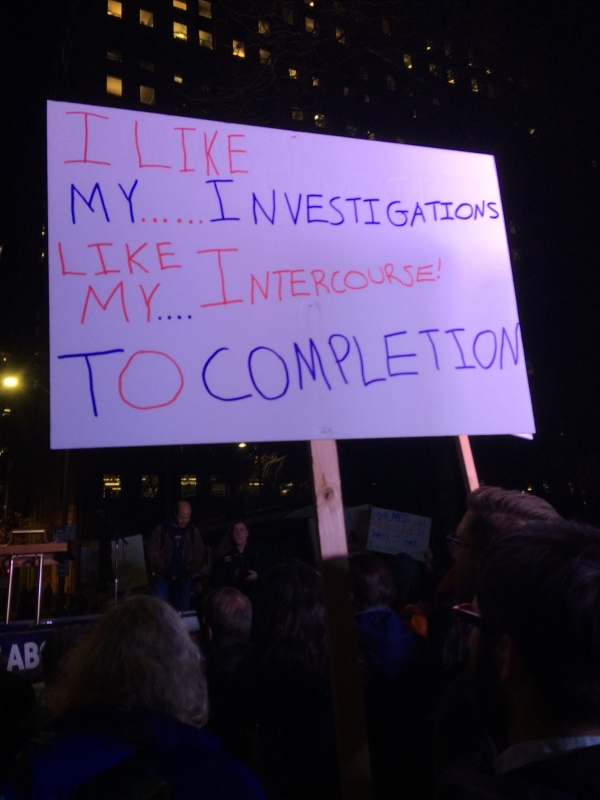 Donald Trump's convincing of Attorney General Jeff Sessions' resignation sparked protests throughout the country, Thursday. This "I like my investigations like my intercourse...to completion" sign was seen in Seattle. Used with permission

With Democrats winning a majority of seats in the United States’ House of Representatives and Republicans retaining a majority in the Senate, a Republican-controlled Congress with an approval rating of just 21 percent entering the 2018 Midterm Elections will be split when new members of Congress are sworn in on January 3. Here are some of the bipartisan issues a split Congress could address, in order of likelihood.

It would be negligent not to acknowledge that Democrats now have the votes to impeach President Donald Trump. House Democrats already introduced five articles of impeachment in November 2017 and could again. Now that Trump has forced the resignation of Attorney General Jeff Sessions and replaced him with Matthew Whitaker, the man who on CNN floated the very idea of replacing Sessions with a temporary Attorney General who could cut funding to Robert Mueller’s investigation into the Trump campaign’s potential involvement with Russian meddling in the 2016 Presidential Election.

Sessions wasn’t well-liked by Democrats, but he did recuse himself from the Mueller investigation to the chagrin of Trump. A day after the 2018 Midterm Election, as to not adversely affect election results, Trump convinced Sessions to resign, but instead of promoting Deputy Attorney General Rod Rosenstein, to whom Mueller currently reports, Trump installed Whitaker, a Trump loyalist.

If Whitaker acts on the idea he floated on CNN, expect House Democrats to respond by filing articles of impeachment, eventually voting on those articles, and forcing Senate Republicans to decide between protecting their own political careers or that of their party’s President. Removing him would take two-thirds of all Senators.

FiveThirtyEight’s Nathaniel Rakich writes that Democrats would need to retain Doug Jones’s seat in Alabama, defeat both Susan Collins in Maine and Cory Gardner in Colorado, and pick up a seat in a red state. The best bets would be in Arizona, where Jon Kyl is not seeking reelection, and in Iowa, where Democrats flipped two House districts and came within 40,025 votes of installing a Democratic Governor. Of course, if Democrats win the Presidential Election, they’d need to win one fewer Senate seat for a majority, as the Vice President would break a tie.

The issue upon which both Congressional Democrats and Republicans can most likely agree is the nation’s need of vast infrastructure updates. U.S. infrastructure was given a D+ grade by the American Society of Structural Engineers in its latest Infrastructure Report Card, and despite efforts to address this, America hasn’t come close to making up for the estimated $2 trillion in needs over 10 years.

New House Committee Leader for Transportation and Infrastructure, Peter DeFazio, appears to be willing to work with the President to rebuild America’s roads, bridges, and subways, and perhaps expand access to high-speed internet. A blueprint for doing so has already been provided by Senate Democrats, requiring an estimated investment of $1.6 trillion.

DeFazio has suggested raising the gas tax in line with inflation to pay for some of the updates. With gas prices at their lowest in six months despite sanctions limiting Iran’s oil exports, addressing America’s crumbling infrastructure could be a means to comfortably introduce new members of Congress to Washington politics, bridge the widening gap between the parties, and deliver a win for both parties, their constituents, and the President, who promised “the biggest and boldest infrastructure investment in American history.” If Democrats and Republicans are actually going to do what they said they will after the elections and work together, infrastructure investment is probably the best place to start.

Regardless, there are probably five votes Democrats could get from Senate Republicans on a middle class tax cut if it doesn’t also include an increase in taxes for the richest Americans and corporations. Any legislation passed by House Democrats will almost certainly include a tax hike on the richest Americans and corporations, however, so the Senate will have to draft legislation agreeable to Senate Republicans and appeasing House Democrats.

Ending federal prohibition of marijuana does not require Congress, but it does require a U.S. Attorney General willing to initiate the process of executive reclassification. With Trump convincing Sessions to resign, the best opportunity for him to boost his approval ratings going into the 2020 Presidential Election might be by appointing an Attorney General willing to initiate this process so Trump can take all the credit for being the President who legalized weed...or at least tried.

Trump doesn’t seem to be considering his Attorney General appointment as an opportunity to improve his approval ratings via cannabis reform. Neither Chris Christie and Pam Bondi have expressed interest in ending marijuana prohibition, but Alexander Acosta as Labor Secretary urged employers to take a “step back” on drug testing so cannabis users could fill the many open employment opportunities.

Still, executive reclassification requires the approval of the Food and Drug Administration (FDA), which consults the Drug Enforcement Administration (DEA). This is where Trump’s self-proclaimed business acumen might have to reveal itself, because the DEA affirmed its hard stance against reclassifying cannabis in 2016, it seized $20.5 million dollars in assets through its Domestic Cannabis Eradication/Suppression Program in 2017. But it did loosen restrictions on cannabis with regards to research.

There was yet another mass shooting resulting in the deaths of 12 people in Thousand Oaks, California, this time by a war veteran whose very actions seemed motivated by Congress’s lack of action in response to gun violence in America. In a Facebook post prior to the attack, the mass shooter wrote “"I hope people call me insane... (laughing emojis).. wouldn't that just be a big ball of irony? Yeah.. I'm insane, but the only thing you people do after these shootings is 'hopes and prayers'.. or 'keep you in my thoughts'... every time... and wonder why these keep happening.”

More in this category: « All across the country, early voter turnout is breaking records Donald Trump's Administration is Looking a lot Like Richard Nixon's: Guilty »
back to top