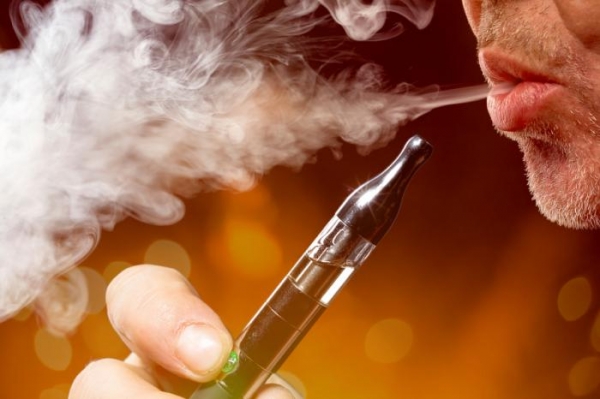 Chemicals in cigarettes and electronic cigarettes, such as nicotine, are excreted through the urine. Researchers examined the urine of e-cig users vs. those of non-smokers and found 92% of those who vaped had at least two of the five chemicals tested.

The University of Minnesota in 2015 identified chemicals commonly found in e-cig vapor to include:

In a second study, researchers looked at bladder tissue to see what nicotine and some of the chemicals in vapor could do. They found nicotine, nitrosamines and formaldehyde not only damaged lining but blocked the DNA repair, hence increasing risk of bladder cancer.

Although exact causes of bladder cancer are unknown, tobacco smoke has been the single greatest risk factor.  Other risk factors for bladder cancer include diets rich in fried foods, arsenic, radon, occupational exposure to aromatic amines in textile, rubber and paint plants, and some medications such as pioglitazone used in diabetes. Being exposed to a worm causing schistosomiasis can also put one at risk for bladder cancer.

Symptoms of bladder cancer include blood in the urine (hematuria), difficulty urinating due to obstruction, pain/burning with urination (dysuria), and sometimes no symptoms at all.

Bladder cancer is treated by surgery, radiation, chemotherapy or immunotherapy.  The earlier it's diagnosed, the easier it is to treat.

According to the American Cancer Society they project for 2017:

How many of these being related to electronic cigarettes is unknown.

More in this category: « Opinion: Trump’s voter fraud commission will suppress voting Opinion: People who text during movies should get worse than a lawsuit »
back to top