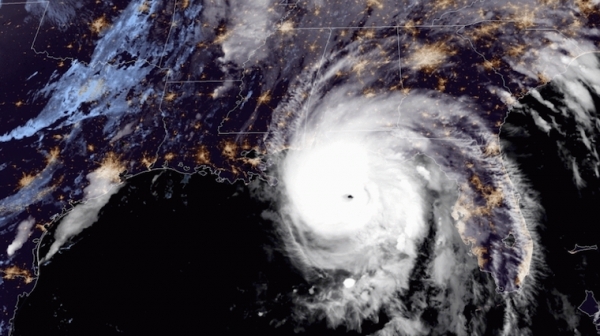 Hurricane Michael, the strongest on record in the U.S. since 2004 hit the Florida coastline this afternoon. It’s too late to evacuate. If you’re there - you’re there. Michael is a Category 4 hurricane with winds at 155 mph. But that makes it that top end of Category 4 because as soon as winds hit 157 it will officially be a Category 5. Not that there is much difference between 155 and 157 mph winds other than the rating system because, either way, enormous damage is about to rain down on Florida.

Not even one month after Florence flooded Georgia & the Carolinas and caused $1.5 billion in damages, the E coast is getting hammered again. This time by Hurricane Michael, which meteorologists have rated a Category 4.

Folks in Georgia and the Carolinas still have flooded areas in large portions of the coastline and in a few more days will receive more rainstorms as Michael hits Florida today but will move N further inland by Friday. Michael is actually the opposite of Florence which went from a Category 4 down to a Category 1 by landfall while Michael increased in strength as it came closer to the SE coastline. In fact, meteorologists believe that Michael will still be a Category 2 Hurricane when it hits Alabama and southern Georgia.

If that’s not bad enough Hurricane Michael, according to the National Oceanic and Atmospheric Administration, could spawn tornadoes anywhere from 50-100 miles outside the hurricane eye. That’s all those folks need, right? Tornadoes to go along with their Category 4 hurricane.

Last month, our very own Dr. Daliah wrote a “How You Can Help” column for Hurricane Florence and all of her information is relevant for Michael as well. You can read her column here. Her column also has plenty of links to the Red Cross, the Army Emergency Relief and other sources if you want to donate assistance. The American Red Cross is accepting monetary and blood donations. Financial donations can be given here or on their website at redcross.org. Moreover one can call 1-800-RED-CROSS or text the word REDCROSS to 90999 to make a $10 donation. More relief numbers in her column.

The forecast cone is expected to stretch Michael all the way north to Maryland, which is a lot of damage, and a lot of danger.

More in this category: « Hurricane Florence: How You Can Help The staggering damage toll of Hurricane Michael »
back to top