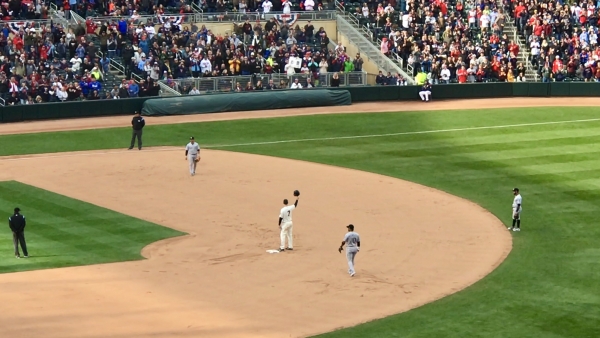 Baseball quite literally is not making ballplayers like Joe Mauer anymore. In fact, he’s potentially the last of a bygone era, during which striking out was still frowned upon by coaches and downright despised by some players.

Joe Mauer hates striking out — so much so he struck out just once in high school. Even as Major League Baseball evolved into a game with more pitchers throwing harder and nastier pitches than ever before, Mauer refused to change his approach and was good enough to not only get away with it, but force defenses to adjust to him just as Barry Bonds before him. Mauer received one of the most extreme defensive outfield shifts in baseball, and he got his hits despite it.

Of the top 21 seasons in overall strikeouts in MLB history, Mauer played in 15. He struck out more than 100 times just once, and his OPS+ was under 100 in just two seasons of his career. But some still think Mauer was overpaid given the expectancy for him to catch full-time.

Mauer, a soft-spoken, Minnesota-nice guy, has his share of haters who think he should have cowboyed up and got behind the plate to earn his $23 million every year despite a concussion issue that not only threatened his career but his life off the field. An issue that reappeared this season upon a dive for a ball at first base and might be responsible for Mauer’s indecision regarding his playing future.

Not being overpaid relative to his fellow first basemen won’t make Mauer a first-ballot Hall of Famer like Pujols and Cabrera, but it doesn’t hurt.

The Hall of Fame Question

Most will say Mauer’s six All-Star appearances and 2,123 hits aren’t enough. Most will say he never won a playoff series. Most will say his 55.1 career Wins Above Replacement (WAR) isn’t even as good as another former Twin (David Ortiz, 55.3) despite it being top-100 all time amongst Hall of Fame position players and 151st all time in MLB history, according to Baseball Reference.

Mauer’s integrity and humility are Hall-of-Fame caliber, however. Unlike Ortiz, who failed a 2003 performance-enhancing drug test, Mauer’s legacy is unquestioned and untarnished. Although Mauer only played in the post-steroid era of Major League Baseball (the drug policy as we know it was first implemented and enforced in 2004), he’s someone who might have benefited from steroids and had an “opportunity” to use them after sustaining a knee injury in his rookie season. At 21, Joe knew better, and at 28, when his body struggled recovering from surgery and then fell ill with pneumonia, Mauer probably never even considered using steroids.

Mauer’s .3063 career batting average is, ironically, identical to his Hall of Fame manager’s, good for 138th-best all time. But Paul Molitor has 1,196 more hits than Joe. Regardless, Mauer’s career batting average is sandwiched between Hall of Famers Ernie Lombardi and George Kell, and is better than that of the next-best hitting catcher of his era, Buster Posey (.306). Mauer’s the only catcher ever to win three batting titles, too.

But what makes Hall of Famers is their relative dominance of their respective eras. Barry Bonds didn’t have to beat Babe Ruth in career home runs; he just needed to dominate his era like Ruth his. Mauer is a Hall of Famer given his place amongst his peers.

When compared to his peers, from 2004 to 2018, Mauer’s batting average ranks ninth, between Mike Trout and Buster Posey. His OBP is twelfth, between Hall of Famer Chipper Jones and Bryce Harper. His Weighted Runs Created (WRC) is tenth, whereas Posey ranks 94th. On an All-MLB 2004–18 Team, Mauer would clearly be the catcher, and he’s probably the fourth-best first baseman of his generation, behind Miguel Cabrera, Albert Pujols, and Joey Votto — all first-ballot Hall of Famers.

Mauer’s numbers aren’t first-ballot-Hall-of-Fame worthy, but the way he represented the game of baseball and himself on and off the field is worthy of first-ballot consideration, which he’ll receive. Joe might even be a victim of the Hall of Fame shrinking the length of time players stay on the ballot from 15 years to 10. Mauer won’t be eligible for induction until 2023 at the earliest, but judging from the lack of retirees expected this season, he could benefit from a lack of competition. We don’t know if this is Adrian Beltre’s final season, and if it isn’t, Mauer could be sharing the ballot with holdovers from previous years, not including Bonds or Roger Clemens, who will fall off the ballot in three years.

Even if Joe isn’t voted into the MLB Hall of Fame by the Baseball Writers’ Association of America, he will most certainly get support from the Hall of Fame’s Veterans Committee. One way or another, Joe Mauer is a Hall of Fame player. Personally, I’d like to see if he’s a Hall of Fame manager.

More in this category: « Solving Football's Place-kicking Problem While MLS Thrives in Minnesota, Miami's MLS Hopes are Drowning in Loria's Wake »
back to top