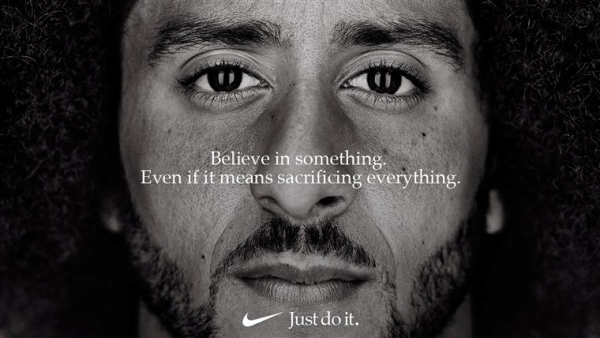 Last month, as you may or may not know, Nike released a new Just Do It campaign starring a variety of young athletes as well as Lebron James and Colin Kaepernick. The ad is great. Before I get back to Nike, a bit about Colin Kaepernick:

Kaepernick's productivity dipped slightly during the next few years, mainly due to an injury that lasted into the 16 season and he never seemed to fully recover and was not named a starter again; however, his 4-2 play off victories and the fact that he’s only one of four quarterbacks to get 3 passing touchdowns and a 100 yards rushing in a single game means that while he might no  longer be an elite starter in the NFL, it’s pretty obvious he would make an exceptional backup QB.

But then something happened. Colin decided to protest racism - by silently sitting during the national anthem. And folks took note. And the red, rage conservative aneurysms began. And fake news sites spread the word that Colin Kaepernick was “protesting the flag and disrespecting American troops!”

Also, Kaepernick had grown out his hair into an afro. Which makes conservative Americans uncomfortable. No, seriously. As black comedian Paul Mooney says, “If your hair is relaxed, white people are relaxed. If your hair is nappy, they’re not happy.”

And suddenly - redneck white rage was all over the NFL. And Colin Kaepernick took note. He heard that NFL watching white Americans were angry. Kaepernick didn’t want to appear disrespectful to soldiers and he didn’t want his message mixed so he spoke with former Seattle Seahawks player and U.S. Army veteran Nate Boyer about his idea of “sitting down” during the anthem.

Kaepernick says about the meeting with Boyer:

“After hours of careful consideration, and even a visit from Nate Boyer, a retired Green Beret and former NFL player, we came to the conclusion that we (Kaepernick and teammate Eric Reid) should kneel, rather than sit, the next day during the anthem as a peaceful protest. We chose to kneel because it’s a respectful gesture. I remember thinking our posture was like a flag flown at half-mast to mark a tragedy.”

Snopes has a nice write up of the full event here.

Well, as you can imagine - conservative white Americans still lost their shit and wrote all sorts of inflammatory, untrue, hit pieces about Kaepernick calling him everything from “ungrateful” to “traitor.” But the hatred focused on the same false narrative over and over - that Kaepernick’s kneeling was purposely disrespectful to the troops and the flag.

It didn’t matter how many times Colin would eloquently speak up and remind people his protest was about police brutality against people of color; redneck Americas still reared up as fast as possible to call him a traitor, a soldier hater, ungrateful and, of course, the oft used, ni***r!

It didn’t matter that, time and again, Colin would put his money where his mouth was as he donated (and raised) money to and for, what he called, “oppressed communities.” In 2016 he gave a million dollars to charities and neighborhoods all over the country to help with homelessness, community-police relations, prison reform, hunger, etc, etc.

If that wasn’t enough he put together his #10For10 pledge where he asked fellow athletes and artists to donate money to a similar cause. Then Colin agreed to match their donation. Here is what was raised and by whom:

Some familiar names to me, some not. But whatever. Money for good causes is still money for good causes (though, I’m not sure what the F! The “Silicon Valley De-Bug” charity is. I’ll have to look into that one a bit further). But I would say for the most part - worthy causes.

And now let’s come full circle. Colin Kaepernick has been universally vilified by conservative white America. And he’s been blackballed by the NFL for “controversy.”

And Nike does not care.

Colin Kaepernick is now the face of Nike’s new long running Just Do It campaign. And, just like when he took a knee - redneck America is in an uproar. Head over to YouTube and search for hilarious videos of people burning Nike product in protest. See if you can find some of the truly genius ones where folks run out and buy hundreds of dollars of Nike products only to come home and burn them!

You read that right. They give $$ to Nike and then burn the product. So, um, Nike already has their money.

Some people are so dumb.

Anyway. Because of the “controversy” of Nike casting Colin, shares for company dropped the day after that ad released by 3%. Conservative fools everywhere whooped their joys of racism! Hell, even our President chimed in via (where else) Twitter:

“What was Nike thinking? Just like the NFL, whose ratings have gone WAY DOWN, Nike is getting absolutely killed with anger and boycotts. I wonder if they had any idea that it would be this way? As far as the NFL is concerned, I just find it hard to watch, and always will, until they stand for the FLAG!”

But not so fast!

After an initial minor backlash here we are three weeks later and Nike is reporting - all time record sales. Reuters is reporting a huge increase in sold out Nike material (up approx 60%) and anyone can jump online and see that Nike’s market value has surged by $6 billion.

Look, I’m not a Nike guy. At all. This is not a paid advertisement. I’m all with RUN DMC - me and my Adidas! (And Vans). I am however a free speech guy. And, despite the ignorant, racist Kaepernick backlash - he’s clearly one of the good guys.

That being said, I will leave you with Lebron James gloating over President Trump’s “Nike is getting absolutely killed…” Tweet.

Well I mean I guess WE’RE on

More in this category: « How MLB teams use promotional ticket packages to avoid paying state taxes How college students can cut their debt »
back to top