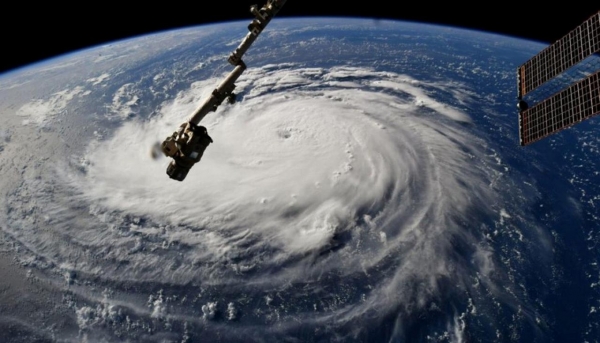 Hurricane Florence begins its long assault on the Georgia, Carolina(s) coastline. My understanding of Florence is that it is an anomaly amongst storms, the main reason being - it’s both wide and slow. Florence is much wider than a typical hurricane and is only travelling at about 2-3 miles per hour. Which isn’t even as fast as a regular person can walk.

What this means is that the force of the storm will linger twice or three times as long as a typical hurricane. And, perhaps obviously - the longer your area is battered with 100 mile an hour winds, the more damage the storm will potentially inflict.

Now, it’s true that in the last several days the storm has dropped from a Category 4 to a Category 3 and now hits the shores as a Category 2. (Go here for a breakdown on the differences between categories of hurricanes) But just because Florence has been downgraded to a C2 doesn’t mean that everyone can now breathe a sigh of relief. The danger is far from over. A C2 hurricane can and will cause significant damage. Again, because the storm is slow it will affect your area much, much longer than a typical storm.

Plus, one hundred mile an hour winds aside, there will still be 30 to 40 inches of rain in a large part of the Carolinas and the coastline is expected to have massive flooding of - get this - anywhere from 6-13 feet of water.

If you can’t imagine what 100 mph wind feels like, think of this - Hurricane Floyd, which also hit the Carolinas in 1999 brought 60 hours of rain (in some areas), massive flooding, caused 74 deaths and approx. $6 billion in damage. And since $100 in 1999 is equal to $147 today (adjusted for inflation) - that would be approx. $9 billion in damage today.

Okay. But Florence is so wide and so damn slow - it’s possible that some areas can expect to be affected by the hurricane twice or three times as long as what happened in Floyd. Imagine that - 120-180 hours of rain! That’s six to seven and a half days of pouring rain!

But that’s not all! Meteorologists have tracked waves 20 feet high and up to 80 feet long heading toward the coastline. Earlier reports suggested the waves were 80 feet high but weathermen (and women)  around the country quickly corrected them. I mean, an 80 foot tall wave is 2004 Indonesia Tsunami high and that wiped out entire cities and swept a quarter of a million people into the ocean. Thankfully, Florence does not have 8o foot high waves.

But still, an 80 foot long wave has tremendous force and once it hits the shore will push inland for a very long time. That, coupled with the rain means - massive flooding. Probably, unlike the Carolinas (and Georgia) have ever experienced.

Florence is expected to be full force from late Thursday until early Sunday. Approx. 36 hours of hurricane gale hitting affected areas. And then - additional rain (for days). I certainly hope most folks heeded their Governor’s warnings to evacuate the area.

Of course, I say that and I am not trying to sound glib. There are plenty of reasons where one might not evacuate. Living in poverty with nowhere else to go comes to mind. I understand there are people who might not be able to evacuate and there are always folks who chose to stay for various reasons. I understand.

But man, if I had the means I would be so out of there.

So, what happens after the storm? Well, as usual the best way that you or I can help is to donate to the American Red Cross. From the Fed side of things there is the Disaster Relief Fund. Of course, President Trump has recently made news because - during the height of Hurricane Florence worry - the President transferred almost $10 million from FEMA (Federal Emergency Management Agency) to ICE (Immigrations and Customs Enforcement).

Now, thankfully, the money President Trump transferred out of FEMA wasn’t part of the Disaster Relief Fund as some have reported. Of course, as reported by Vox.com, this still complicates things. From their Is Trump Using Hurricane Relief Money to fund ICE? Not exactly:

“The Trump administration points out that the $9.8 million transferred from FEMA didn’t come out of the Disaster Relief Fund that is specifically appropriated for major disasters. Instead, it came out of the agency’s “operations and support” fund. DHS (Dept. Homeland Security) characterizes that fund as used for administrative expenses: Examples listed by a DHS official included “employee travel expenses, training, basic purchase cards, office supplies, HQ overhead support.”

What complicates this slightly is that one of the things funded by FEMA “operations and support” is the agency’s Office of Response and Recovery, which organizes the agency’s emergency operations and rebuilding efforts. About $2.5 million of the transferred funds came out of the response and recovery budgets.”

Lovely! So the exact office that organizes the Disaster Relief Fund just had a budget cut of $2.5 million - all during the Florence build up! Think about it this way - what happens in your office when you suddenly lose a significant percentage of your work force and / or work support? You know what happens. Suddenly lots of people double up on jobs that they don’t have any experience in and things are more expensive to process and take twice as long to figure out! Which, is totally what we want to happen when people need the Disaster Relief Fund, right? We all want to make it as hard as possible for people to receive assistance! Right? (Please, note the sarcasm).

*sigh* It’s almost like we have a President who doesn’t give a rat’s ass about people.

Anyway, all that being said. I wish the best for the folks of the Carolinas and Georgia.

This is an updating story. We will publish more about disaster relief, where to find it and how best to help, ASAP.

More in this category: « Opinion: Frankly, the NY Times anonymous op-ed doesn't surprise me at all Hurricane Florence: How You Can Help »
back to top