Made in America: Clothing and fashion 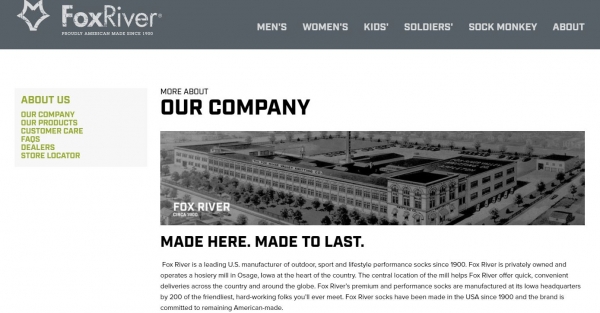 Fox River socks are an American staple and made entirely in the states. Fox River Website Screenshot

Unless you live in a nudist colony, you’ll likely need clothes to make it in America. If you’ve been following along with our “Made in America” series, you’ll know that we’ve already covered American-made forms of transportation, including shoes, home decor and appliances made in the U.S.A., the all-American home, home-grown food and energy, and even American-made vices like alcohol and tobacco. We haven’t forgotten about clothing, which is one of the hardest things to find with “Made in the U.S.A.” on the tag. Chances are slim what you’re wearing now has “Made in the U.S.A.” on the tag.

Clothing keeps us warm, dry and covered, but if Americans made all the clothing purchased in the world, no one would be able to afford it. That’s why it’s so common to find clothes made in Bangladesh, India, Vietnam, Ethiopia, Indonesia, Sri Lanka, the Philippines and, of course, China.

The American clothing market is the largest in the world, totalling $359 billion in 2016, which is why it’s so important to keep those dollars here in America. Employment has nearly doubled in apparel manufacturing, textiles and clothing since 1990, because with more people comes more clothes. But just 1.8 million Americans are employed in the fashion industry, with 79 percent of them working for apparel retailers mostly selling imported products. Just 232,000 are employed to manufacture textiles for apparel and other fashion items (purses, handbags, backpacks, etc.).

In order to change the growing trend of outsourcing fashion and clothing manufacturing, more Americans need to buy more American clothes, and there’s plenty of places to start.

American-made men’s underwear is pretty easy to find. Brad Bennett at the Well Spent blog put together a nice list of American options. Keep in mind that just because a company has an American-sounding name, like Duluth Trading Company (mostly made in Vietnam, but they do have a “USA Made” section) or American Eagle (made in China, Guatemala, India, and Vietnam, with some made in America) doesn’t mean it’s products are all-American. Do your research. The only thing that touches American skin should be American-made.

During the spring, winter and autumn months, there’s no more important stitch of clothing than dry socks. I don’t wear socks for most of the summer unless it rains, but when it comes to keeping my feet warm and dry, I’m a wool man. Wool is the absolute best fabric ever, but the U.S. doesn’t produce much of it. If more people bought more wool, though, maybe it would make a comeback in America.

As I stated earlier, Duluth Trading Company makes some of its products in the U.S.A., and the most common item on their “USA Made” page is socks. If there’s a place that knows cold, it’s Minnesota, but if you’re looking for the best socks on the planet, I’d suggest Darn Tough socks. I recommend them because I have a friend from Vermont, where Darn Tough socks are made, who maintains trails in Glacier National Park, and he swears by them. If there’s an environment that requires darn tough socks, it’s Vermont. It’s the seventh coldest state in America and can be one of the wettest in the spring. Plus, Darn Tough socks are guaranteed for life, so if you manage to put a hole in them, you can return them for another pair. You’ll never buy socks again.

If you’re looking for more fashionable options for men and women, Fox River is the oldest performance sock brand out there. What started as a sock company for lumberjacks 116 years ago is now an all-purpose, sock supplier. They sent out a pair of their Peak Series Lightweight Multisport ankle socks for me to try, and except for them being a little long in the sole, they very comfortable for both the office and the bicycle commute. The "helix fit" as they call it provides volumetric compression around the foot between the ankle and toes. The mesh ventilation zones allow your feet to breathe, and the EverWear Durability Shield on the back of the sock above the heel is a neat feature that should prevent holes in the area that rubs against your shoe. For women’s socks visit here, and if you’re seeking hosiery, tights or leggings, No Nonsense provides an ample supply of American-made products for women. If you’re a man in need of dress socks, look no further than Dapper Classics, which also produces American-made shirts and ties for the office.

There is a plethora of men’s pants and shirts, women’s dresses and blouses, children’s clothes and even maternity wear made in America. The easiest thing you can do to find American-made options from your favorite retailers is enter “Made in the USA” in their catalog’s search bar. Most online stores like Nordstrom, Lulu’s and Orvis, understand the importance of catering to patriotic purchasers and have a dedicated page for American-made products. If you’re into sportswear, and specifically throwback baseball uniforms and caps, Ebbets Field Flannels is one of my new favorite American stores. There you can buy jerseys you didn't know existed.

USA Love List put together a great list of American-made outerwear for women recently, and if you’re a leather man, Schott NYC has everything from jackets, belts and boots made in America.  Woolrich also provides a page of outdoorsy, clothing products made in the U.S.A. If you’re more into designer trends, The Good Trade put together a list of 15 American-made clothing brands that will turn heads, and GQ has a list of American clothing brands just for men. The most complete Made in America men’s wear list is likely this one by Gear Patrol. Here’s a recent list of more than 100 brands that produce 100 percent of their clothing in America.

So now you have no reason to purchase clothing that isn’t made in America other than cost, but wages in areas where clothes are made are increasing, while American wages remain stagnant, which means American-made clothing will at least be more competitive with imported clothing in the future. So don’t be the typical cheap American when it comes to clothing. I guarantee if you buy the brands listed above, you’ll get more life out of your clothing and more satisfaction for creating American jobs, too.

Next up in our “Made in America” series we’ll look at the best brands for recreation equipment, including guns and ammo, ATVs, tents, backpacks, sleeping bags and the like.

More in this category: « MONUMENTS, THE PRESIDENT AND THE CIVIL WAR! Depeche Mode’s Glorious Facebook Fan Takeover (and, yes, there is still time to apply) »
back to top