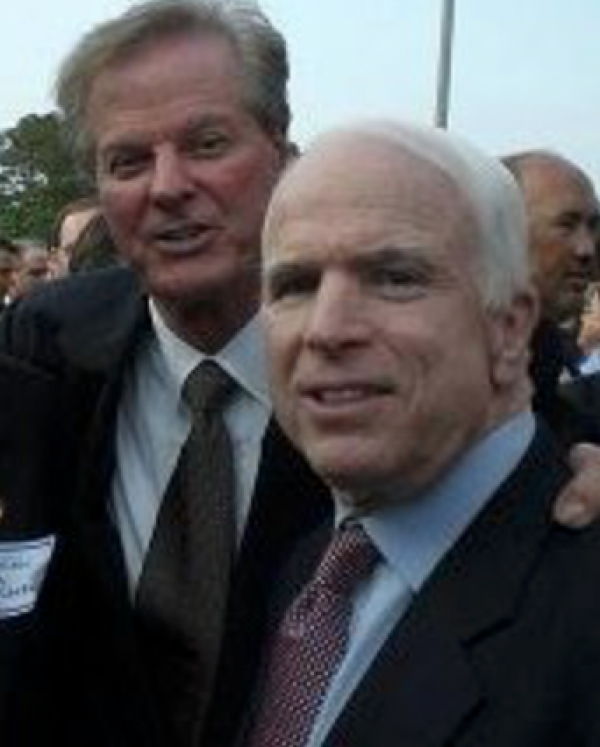 John McCain was a rare commodity in U. S. politics. He was a war hero, full of good-natured irreverence, and a contrarian in the Republican Party. McCain made it abundantly clear that he put America before party politics. And when they both served in congress, McCain and Louisiana Governor Buddy Roemer became good friends.

I met and visited Senator McCain on one occasion at the invitation of Roemer. The meeting was at the former governor’s Baton Rouge office, and McCain made it very clear to me that he loved Louisiana. He told me outside of his home state of Arizona, “there’s no place I’d rather be to enjoy the great food and the company of really lively and interesting folks than down her in Louisiana.”

Buddy Roemer had been out of the limelight for seventeen years, once he stepped down as Louisiana’s Governor in 1991. But when Senator John McCain wrapped up the Republican presidential nomination, Roemer found himself back in the catbird’s seat as a major player on the national scene.

Roemer signed on with the McCain team over a year before the election when the Arizona senator was just one of many in the pack. The Louisiana governor was on my syndicated radio show early on, touting McCain’s credentials when his campaign seemed to be in free-fall. By then Roemer had emerged as a key McCain adviser, and was featured in TV spots nationwide.

Buddy Roemer has always been a gambler. When he was governor, his campaign disclosure statements regularly showed winnings at poker games held at the Governor’s mansion. And Roemer has never been averse to playing a long shot, even on his own campaigns. He fought uphill races to get elected to Congress in the 1980s, and was in the rear of the pack in governor’s race when the campaign began back in 1987.

During the 2008 presidential election, Louisiana Senator David Vitter had initially pushed Louisiana republicans to support the quixotic campaign of former New York Mayor Rudy Giuliani. But when Giuliani’s campaign crashed and burned, Roemer quietly began lining up support and raising campaign funds for McCain. If the Republican candidate had ended up being successful in that coming fall presidential election, Roemer would have emerged as a cabinet secretary, ambassador, or hold some other high post in a McCain administration.

When George Bush was elected president in 2000, Roemer was under serious consideration to be Ambassador to China. He used to play tennis with the former President Bush 43, and stayed in touch with a cross-section of Republicans throughout the country.

After getting out of elective office, Roemer had been involved in several successful bank ventures. But the lure of public service was still there. If John McCain became the next president, the odds were pretty good that a former Governor of Louisiana was going to be heading to Washington, DC.

McCain’s presidential aspirations were unsuccessful, but he did carry Louisiana with 60% of the vote. After being side tracked by Barack Obama, he went on to spend 10 more successful years in the U.S. Senate.  Roemer built more banks and became a popular Louisiana author.

If you had to sum up John McCain’s life in a couple of words, they would be “honor and character.”  He ruffled the feathers of a number of republicans by working with democrats across the aisle on issues he felt were good for America. His philosophy was simple - put country before party politics.

Knowing of his impending death, McCain said about his life: “ I don’t have a complaint. Not one. It’s been quite a ride. … I made a small place for myself in the story of America and the history of my times. I hope those who mourn my passing, and even those who don’t, will celebrate as I celebrate a happy life lived in imperfect service to a country made of ideals, whose continued service is the hope of the world. And I wish all of you great adventures, good company, and lives as lucky as mine.”

More in this category: All across the country, early voter turnout is breaking records »
back to top