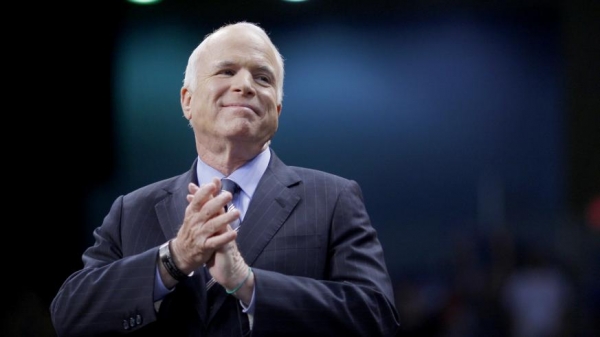 After being diagnosed with a brain tumor a little over a year ago, Senator John McCain has chosen to end treatment for the deadly cancer.

The 81-year-old Vietnam veteran and former POW was diagnosed with a primary glioblastoma in the summer of 2017. Since then he has bravely fought the malignant brain tumor.  His family reported this week the following:

Last summer, Senator John McCain shared with Americans the news our family already knew: he had been diagnosed with an aggressive glioblastoma, and the prognosis was serious. In the year since, John has surpassed expectations for his survival. But the progress of disease and the inexorable advance of age render their verdict. With his usual strength of will, he has now chosen to discontinue medical treatment.

Our family is immensely grateful for the support and kindness of all his caregivers over the last year, and for the continuing outpouring of concern and affection from John’s many friends and associates, and the many thousands of people who are keeping him in their prayers. God bless and thank you all.

Although still politically vocal, Senator McCain has not been in Washington since December.  He’s been at his home in Arizona with his family.

What is Primary Glioblastoma?

Primary Glioblastoma Multiforme is a type of brain tumor that arises in the brain and spinal cord and is very aggressive in nature. “Primary” suggests the tumor is not secondary to another cancer, such as the melanoma Senator McCain successfully battled.

Those diagnosed with a glioblastoma may have a poorer prognosis compared to other cancers as the 5-year survival rate is only 10%. Its median survival is less than 15 months.

In 2017, doctors were optimistic as his lesion had been removed, and chemotherapy and radiation were set to immediately begin once his incision had healed.

However many may choose to end cancer treatment early due to side effects or the desire to spend their remaining weeks with family devoid of medical procedures and hospital trips.  It's understandable and gutsy.  Our prayers are with him and his family during this difficult time.