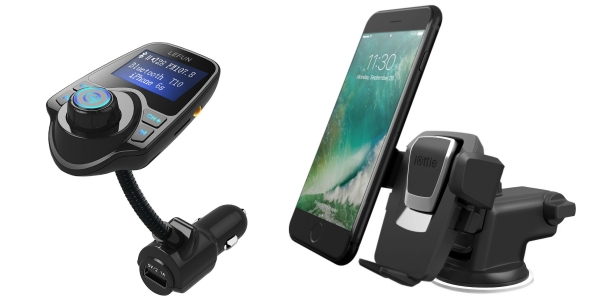 With a Bluetooth FM transmitter and a car mount for your phone, you can take calls, send text messages and even emails hands-free. You can even listen to your phone's music library on the radio. Amazon Stock Images

It happens almost everyday during my commute to work: someone fondling a phone and not looking at the road while driving. Today was no exception. It’s infuriating, and it’s dangerous.

Distracted driving deaths grew 8.8 percent between 2014 and 2015 -- growing faster than deaths due to unrestrained passengers, speeding or drunk driving, according to the National Highway Traffic Safety Administration. In response, many states and even municipalities are enacting distracted driving laws. But it’s impossible for police to enforce every instance of distracted driving.

The City of Chicago made the mistake of allowing distracted driving citations to be enforced like all other traffic citations, forcing police officers to appear in court when drivers attempt to get out of the ticket. What’s resulted is a complete lack of enforcement of the law, with distracted driving ticketing falling 99.6 percent in the city from 2014 to 2016.

There’s never a reason to be fondling a phone while driving, but people do it. So what’s the solution? Well, if you have a newer car with hands-free technology, you already have a solution. But not all of us can afford to buy new cars this very minute. There’s a cheap solution for us, too.

For less than $20, you can equip your car with hands-free technology as long as you have a working 12-volt socket and radio in your car. These Bluetooth devices allow you to take calls with the push of a button, which is the equivalent of changing the radio station. You’ll never fumble around for your phone while driving again, and you can listen to your music library during your commute. I actually own one of these, and they are literal lifesavers.

Both iPhone and Android devices allow for voice activated email and text messaging, too. You can activate “Hey, Siri” when the screen is locked in your iPhone settings, and there’s even a workaround for using “Hey, Siri” when you’re not connected to power. Before starting your car, just hold the home button for a second to enter the Siri screen and don’t say anything. You’ll remain in the Siri screen and will just have to say “Hey, Siri” to go hands-free. On Android devices, the lock screen is even easier to work around. All you have to do is turn on “Trusted Voice” in your Voice settings (unless you have a Nexus 6, Moto X, Galaxy Note 4 or Note Edge).

New drivers are the ones most at risk of being ticketed or lost to distracted driving, though. I hope there’s a focus on that in driver's education courses. Some school districts are just getting around to changing drivers ed curriculum now. Smartphones didn’t exist when I went through drivers ed, but cell phones were starting to become more prevalent. The videos we watched looked like they were created for the first drivers ed course in the 1950s, so I hope distracted driving education is taking place in those courses, because I know these drivers, and they are as dangerous as drunk drivers, or even more so.

If you’re a parent of one of these new drivers, buy them the products mentioned above. You could save their life, and the Bluetooth device makes a great gift, especially if your new driver’s car has nothing but a radio, or worse yet, a CD player. CDs were the distracted driving of my generation.

This isn’t rocket science, folks. It’s not even car science. If you’re still fondling a phone while behind the wheel of a car, just stop it. You’re going to end up killing someone -- maybe yourself. Just take these simple steps to not only avoid a distracted driving ticket, but save your fellow motorists from frustration and harm.

More in this category: « Minnesota Wild 2017 offseason outlook 12 Plants That Make Your Home and Office Healthier »
back to top