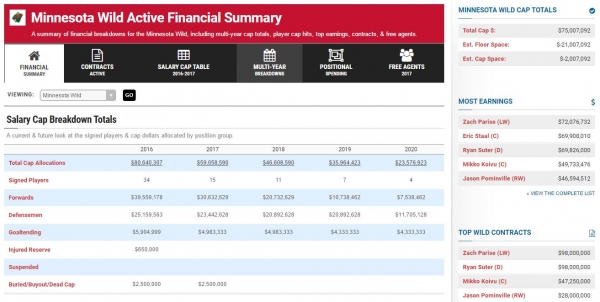 The Minnesota Wild stumbled into the 2016-17 Stanley Cup Playoffs and ran into the hottest team in the Western Conference at the time, falling 4-1 to the St. Louis Blues, led by former Wild coach Mike Yeo. Despite a .925 save percentage and 1.86 goals against average, Devan Dubnyk was bested by Jake Allen (.935 SV%, 1.96 GAA) and may not have done much better against Pekka Rinne, who had nearly as many points as goals allowed in the first round of the Stanley Cup Playoffs (two assists and three goals allowed).

There’s no denying the Wild lost something on both sides of the puck when general manager Chuck Fletcher made a trade deadline deal on Feb. 26 with Arizona, sending a 2017 first-round pick, 2018 second-round pick, a 2019 fourth-round pick and minor league center Grayson Downing to Arizona for Martin Hanzal, a big, two-way center, tough forward Ryan White and a 2017 fourth-round pick. Both are unrestricted free agents and will clear $4.1 million in salary, but it won’t be enough to get what Minnesota needs.

The Wild dominated every aspect of the series against the Blues if you look at traditional statistics. The Wild led in shots on goal in every game except the game they won (the Wild and Blues both had 28 shots on goal in Game 4). The Wild had higher quality shots in every game but the clincher, shooting from shorter distances than the Blues more often, so they were getting the puck in the right places. The Wild had four fewer penalty minutes and two more power play goals than the Blues. The Wild even led in hits in every game except Game 3, although the quality of hits is more important than the quantity, and the Blues had a size advantage almost everywhere on the ice (unless Martin Hanzel was on the ice). The Wild possessed the puck more often, which isn’t surprising. The only thing the Blues did better was block shots, which is also unsurprising given Mike Yeo’s zone defense that reminds me of the late Dennis Green’s “prevent” defense used when the Vikings had a lead back in the 1990s.

So the Wild had quality opportunities to score and Jake Allen was standing on his head, right? Wrong. If you look at the analytics, there were plenty of Wild players that performed poorly in the playoffs. Let’s start with the worst first.

Folin’s Corsi was -10.1, and his Fenwick was -14.8 because he only got one shot through to goal in three attempts and obviously allowed more shots than one. Folin is a restricted free agent at 25, will be subject to the expansion draft, and might not be back.

Charlie had two points in the playoffs and a plus/minus of -1, but his relative Corsi was -5 and his relative Fenwick was -7.8 -- second worst on the team. Coyle got 60.9 percent of his shots through to goal, though. Coyle is signed through 2019 and is set to make merely $3.2 million per year, but will likely be subjected to the expansion draft.

Stewart, 29, tied the captain, Mikko Koivu, for the lowest shot-through percentage on the team at 28.6 percent. He got two shots on goal in 39 minutes, and his Fenwick was third worst at -7.3 and his Corsi was seventh worst at -4. He’s signed through 2017 for $1.15 million and won’t be selected by Las Vegas, which means he’s back with the Wild.

Scandella peppered Jake Allen with 10 shots in 113 minutes for a plus/minus of -1. His Corsi was -4.5, and his Fenwick was -5.7. Scandella is signed through 2019 for $4 million annually, so at 26, he’ll likely be subjected to the expansion draft, as all his regular season numbers were down this season.

Dumba’s big shot was a non-factor in the playoffs. He had no points in 119 minutes and a plus/minus of -1. His relative Corsi and relative Fenwick numbers were identical: -4.7. His through percentage was just 36.8 percent. A great slap shot isn’t any good if it doesn’t get on goal, but Dumba trails only Nate Prosser when it comes to scoring chances allowed, so he’s limiting the big mistakes for which he’s been known. He’s signed through 2017 for just $2.55 million, so Chuck Fletcher probably wants to protect him, as Dumba’s just 22.

Neiderreiter had just 80 minutes of ice time in the playoffs and one point for a plus/minus of -2 after impressing with his best regular season by far. His relative Fenwick was fourth worst (-7) and his relative Corsi was -2. Expect Chuck Fletcher to attempt to resign him, as he’s a restricted free agent at 24. He’ll be tough to replace regardless of his playoff performance.

This one hurts, as Parise is signed through 2025. Parise took a goal right out of the net in Game 1, and he didn’t get any better. While his shot-through percentage was tops on the team at 79.2 percent, his Corsi and Fenwick numbers were -4.6 and -4.5 respectively. There’s nothing the Wild can do but move him down the lines.

In 62 playoff minutes, Haula had one point and a plus/minus of -2. His shot-through percentage was 60, but his relative Fenwick was -2.7 while his relative Corsi was 0.1. Haula’s a restricted free agent and won’t be protected from the expansion draft at 25.

Staal absolutely exceeded expectations in his first year as the Wild’s top-line center. He played every game and logged a plus/minus of 17 -- the highest of his career. His Corsi and Fenwick numbers took big dives from last season, though. His regular season relative Corsi dropped from 5.8 to 3.8 and his relative Fenwick fell from 4.6 to 3.2.

Staal was worse in the playoffs, with a relative Corsi of -4.6 and a relative Fenwick was -1.6. He’s only posted a positive plus/minus in the playoffs in his first season in the playoffs with Carolina and will be 33 next season. That’s why I think Staal is a good trade piece, given his $3.5 million-per-year contract over the next two seasons. He’d be a great veteran presence for a young Las Vegas squad, and Chuck Fletcher should be able to get late-first- or early-second-round pick for him. Staal has a 20-team, no-trade clause that could be a problem, but he doesn’t necessarily have to go to Las Vegas, either. He’d be an upgrade for the Blues and Montreal.

That brings me to what Chuck Fletcher should do in free agency this offseason. With the already allocated salaries for 2017-18, the Wild are spending a little over $59 million, but Neiderreiter and Granlund will likely get raises as restricted free agents. Say Chuck Fletcher gives them $8 million per year to split. That puts the salary cap figure at $67 million of the $73 million salary cap.

Now say Chuck Fletcher trades Eric Staal to Las Vegas for picks. That would free up another $3.5 million in cap space to give Fletcher around $6.5 million to spend in free agency, which could be enough to grab T.J. Oshie -- the best center on the market.

Think about what the Wild are missing -- a guy who can score on his own. The majority of the success Minnesota had during the regular season relied on goaltending, precision passing, breakaway and power play goals. They don’t have a player who can score from distance in traffic, and it showed against the Blues.

Oshie has 12 points in 12 playoff games with the Capitals so far. His relative Fenwick is 10.3 in these playoffs and was 16.1 in last year’s playoffs. His relative Corsi in this year’s playoffs is 6.6, and it was 14.7 in last year’s playoffs. He also had regular season career highs in both relative Corsi (8.1) and relative Fenwick (9.6) this year. So trading Staal after his best season and signing Oshie after his best season should be the focus of Wild general manager Chuck Fletcher if he wants to retain his job and take the Wild to the Stanley Cup.