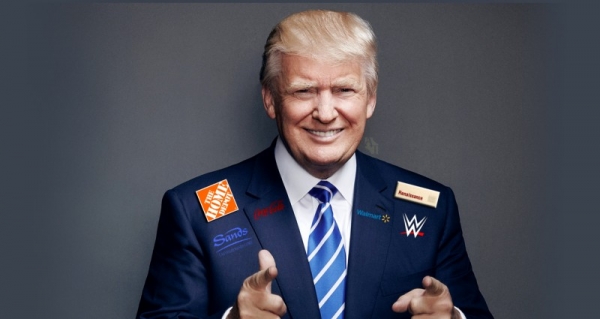 President Donald Trump wearing some of his biggest campaign contributors as required by the Non-individual And Super-PAC Contributions Advertising Requirement, or N.A.S.C.A.R. Act. Grandstand Central

There’s no secret as to which companies sponsor which drivers in NASCAR. It’s advertised all over the cars and drivers. NASCAR drivers aren’t bashful when it comes to endorsing their sponsors either, and race fans can easily see the companies that support them. Politicians should be no different. In fact, they should be just as eager to do so at the podium as NASCAR drivers are on victory lane. They should wear the logos of their campaign contributors with pride, stitched into their thousand-dollar suits, and they should proudly thank every one of them in their victory and concession speeches. Like NASCAR drivers, politicians wouldn’t be where they are without their campaign contributors. That’s why I’m proposing the Non-individual And Super-PAC Contributions Advertising Requirement, or N.A.S.C.A.R. Act, to end all that secrecy, and force politicians to reveal who paid for their campaign.

This was originally published at Grandstand Central.

Much has been made of the need for transparency with regards to campaign contributions in American elections, but not much has been done. Sure, there are organizations and journalists reporting from where the “dark money” comes, but few media outlets are reporting those stories and even fewer voters are reading or watching them when they are reported. The result is a record-number of Americans — 36 percent, according to an October 2017 poll by the General Social Survey — being ashamed of the way democracy works in America.

Even if you wanted to know who gave what to whom, the research is time-consuming, relatively un-revealing and you have to trust the number-crunchers and fact-checkers did their jobs. But you still couldn’t determine the amount a super PAC spent on a television advertisement in support of a politician’s specific agenda item like abortion. We’re lucky to have projects like OpenSecrets to reveal campaign contributors to the Americans who discover and believe their research to be accurate, but the American people shouldn’t have to search for that information because major campaign contributors shouldn’t be secrets.

Americans need to see who (and it is “who” since corporations are people by law) is most responsible for electing their elected officials, and the N.A.S.C.A.R. Act would require elected officials to display all non-individual campaign contributions on their person when in view of the public — whether that’s on television, in-person or even on vacation.

Since elected officials are public figures and celebrities of sorts, they are always representative of their office, regardless of whether they’re on the clock or not. When a politician commits sexual assault, he or she doesn’t get a pass because it happened outside the office or during off-duty hours. This form of public shaming would make elected officials think twice about taking money from just anyone or any one organization, and it would make corporations consider the consequences of supporting specific candidates, solving some of America’s campaign finance fiasco.

A majority of Americans support campaign finance reform, according to an August 2017 Ipsos Poll on behalf of the Center for Public Integrity, and almost half of those polled opposed the Citizens United decision that made corporations people and money free speech. “Given the chance to change the campaign finance system, a majority of Americans (57%) would place limits on the amount of money super PACs can raise and spend.” But there already are limits on the amount of money PACs can raise and spend, and super PACs are simply a means for wealthy individuals to give candidates more than the $2,700 limit per election without violating federal law.

PAC stands for Political Action Committee, and it’s how corporations and nonprofit organizations, including churches, funnel millions of dollars into elections without directly contributing to candidates’ campaigns, which would violate federal law. While super PACs cannot contribute directly to a politician’s campaign, they can produce commercials and advertising in support of a particular politician’s platform or agenda, or more commonly, against the platform or agenda of a particular politician’s opponent.

Toyota, a Japanese company, used its PAC to spend nearly half a million dollars supporting 36 Senate candidates and 155 House representatives in the 2018 federal elections. So are those 191 elected officials inclined to represent the interests of the constituents who made individual donations, or the constituents who voted for them, or do their jobs quite literally depend on them doing as Toyota and their other corporate donors demand?

Tom Steyer, a billionaire hedge fund manager, was the biggest campaign contributor in 2018, supporting Democrats with nearly $30 million. Second in campaign contributions was Richard and Elizabeth Uihlein, of U-Line, Inc. They supported Republicans with nearly $27 million. The only actual individual on the list who’s not a representative of a business is Deborah Simon, who is described as a “philanthropist” and made nearly $4.5 million in contributions to Democrats.

The premise of the N.A.S.C.A.R. Act is simple: any campaign contribution to a candidate through a PAC, or any super PAC contribution from which the candidate clearly benefits must be revealed by the candidate, with the largest contributions being most visible on their person when in view of the public.

Instead of Robert Mercer being able to hide his hedge fund firm behind his super PAC supporting Donald Trump, Trump would be required to wear a Renaissance Technologies logo on his chest or higher (so television cameras pick it up) in a size proportional to the $13.5 million in contributions he received from Mercer when compared to the candidate’s total campaign contributions. Whether that would keep Mercer from contributing in the future depends on what he thinks Trump’s actions will cost him and his company by “sponsoring” the candidate. So both the sponsor and the “driver” have to consider the risk their political-business relationship could have on the politician’s ability to keep his job and the sponsor’s ability to sell its product or service.

The same goes for Sheldon and Miriam Adelson of the Las Vegas Sands Corporation, who contributed $10 million to Trump’s campaign. Linda McMahon of World Wrestling Entertainment contributed $6 million. Co-founder and former CEO of Home Depot, Bernard Marcus, contributed $7 million, and even though he’s retired, Home Depot would still be advertised on Trump’s person given Marcus’s 3.8-percent ownership stake in the company.

Houston Texans owner Bob McNair, who apologized for comparing NFL players to inmates when discussing the anthem protests with owners and then only regretted the apology because he wasn’t referring to players but NFL office executives, gave $2 million to a pro-Trump super PAC. So the Texans logo would be affixed to Trump’s suit jackets under the N.A.S.C.A.R. Act. He wasn’t the only NFL owner who contributed to Trump either. He and seven other owners donated $7.25 million to Trump’s inauguration fund, but those donations aren’t campaign contributions and wouldn’t apply under the N.A.S.C.A.R. Act.

I have shared this bill, the full text of which you can find below, with multiple Congresspeople and have received no responses. But Harvard Law Professor and author of Republic, Lost, Lawrence Lessig, was most gracious and thanked me for my work “for a functioning republic.”

“I’m afraid I don’t think this brilliant hack would be upheld under the 1st amendment, but maybe,” he told Grandstand Central via email on Wednesday. “But more fundamentally, I think our energy has got to be focused on changing the system, not shaming people who live under the current system. There’s no clean private money way to run for Congress or other lower offices. That means we need to change the money.”

Politicians shouldn’t need the N.A.S.C.A.R. Act to become law in order to abide by it. If politicians have their constituents’ interests in mind, they would reveal their non-individual, super PAC and PAC contributors without being required to do so by law.

I am a firm believer, along with Lessig, that very little can change in America until campaign finance changes. The N.A.S.C.A.R. Act doesn’t stop corporations and billionaires from buying elections, but it would reveal to the American public who bought the elections. It’s not victory lane, but it’s at least a fast start from the pole position. America just needs one driver to put on that suit jacket littered with logos and lead the rest of the honest drivers who are proud of their sponsors but know it’s all about the fans in the stands.

The Non-individual And Super-PAC Contributions Advertising Requirement, or N.A.S.C.A.R. Act
A politician’s non-individual, PAC, and super PAC campaign contributions must be visible on his or her person while in view of the public.

BE IT ENACTED BY THE CONGRESS HERE ASSEMBLED THAT:

SECTION 1. Every elected official in service of the United States of America make every non-individual campaign contribution from which they benefited in the previous election or stand to benefit since, visible on his or her person at all times while in view of the public, and proportional in size to indicate the percentage of total campaign contributions for the election cycle. Violators will subject themselves to recall elections if so petitioned by their constituents.

SECTION 4. The Federal Election Commission will oversee the enforcement of the bill along with the specific enforcement mechanism.

SECTION 5. This law will take effect two weeks after its passage to allow politicians ample time to properly display their non-individual, campaign contributors.

SECTION 6. All laws in conflict with this legislation are hereby declared null and void.

Introduced for Congressional Debate by ______.