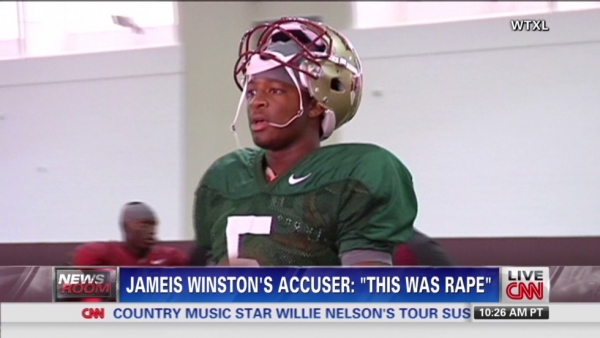 This isn't the first time Jameis Winston has been alleged of sexual assault. CNN screenshot

At Foul Play-by-Play we investigate foul play on and off the field, court, ice and pitch, giving you the week's cheats, cheap shots and alleged criminals in sports. Here are the headlines for the last two weeks ending July 1.

Tampa Bay Buccaneers quarterback Jameis Winston has been suspended for the first three games of the 2018 season for allegedly groping an Uber driver over two years ago. Winston has denied the allegations and negotiated a six-game suspension down to three games for issuing an apology, during which Winston never admitted guilt. He said he was sorry to have put her in that position but not for sexually assaulting her.

The suspension stems from an alleged incident that occurred in March of 2016, a couple of months after the end of Winston's rookie season in the NFL. After partying with friends in Scottsdale, Arizona, Winston ended up in an Uber. The driver of that car, whose identity still has never been revealed, alleges that Winston grabbed her crotch while they were waiting in a restaurant drive-thru lane. She did not and has not pressed charges but reported the incident to Uber, which deactivated Winston’s account shortly after.

The NFL was made aware of the incident after the accuser shared her story with BuzzFeed News. Witnesses have differing testimonies of the night in question, with Winston’s former Florida State teammate Ronald Darby saying he was in the Uber that night and that “nothing inappropriate in nature happened in the car that evening and Jameis did not have any physical contact with the Uber driver.” But former Vanderbilt football player Brandon Banks, serving a 15-year prison sentence for rape and sexual battery, said he and Darby put Winston in the Uber alone that night.

In similarly ugly NFL news of foul play off the field, outgoing Carolina Panthers owner Jerry Richardson was fined $2.75 million after an investigation confirmed allegations of racial and sexual misconduct in the workplace.

In a letter to Richardson published by Sports Illustrated, one of the women said she "didn't know what to do" about alleged multiple sexual advances by Richardson, including being asked to place her feet in his lap to be rubbed from toes to crotch, being asked to turn around so Richardson could see how her jeans fit, hands placed on her breasts and lips, and being asked sexually charged questions.

The sale of the Panthers to hedge fund billionaire David Tepper was approved at the owners meetings in May for an NFL-record $2.275 billion and is expected to close in the next two weeks. Richardson and investors paid just $203 million for the franchise in 1993.

One thing I’ve taken from the Me Too movement is that the victims of sexual harassment place vastly different values on their privacy. I think I would bring charges regardless of how much money there was to be won in a sexual assault or harassment case. But some of these victims would rather remain anonymous and tell BuzzFeed for an unannounced amount of money. What would you do?

The Detroit Tigers fired pitching coach Chris Bosio for using insensitive language towards a team employee, but the whole thing could be a misunderstanding that results in legal action taken by Bosio against the team.

Bosio said he used the word  “monkey” to describe Tigers pitcher Daniel Stumpf in the team’s coaches’ room. Bosio calls Stumpf “Spider Monkey.” “That’s his nickname,” he said, “He's a skinny little white kid who makes all of these funny faces when he works out.”

Bosio believes the black clubhouse attendant thought he and the other coach were talking about him, but he insists that was not the case, swearing on his parents’ graves in an interview with USA Today.

In what could be a similar case...

Hanley Ramirez was wrongfully implicated by Michele McPhee of ABC News in connection with a drug arrest of a man who Facetime’d Ramirez during the stop, claiming some of the paraphernalia to belong to him. The accused said later that he was trying to get the cops off his back.

Ramirez was released by the Red Sox on May 25 and has been a free agent looking for work since June 1. While Ramirez’s OPS of .708 is well below his .848 career OPS, he’s likely missed out on an employment opportunity because of this ABC News crime reporter needlessly mentioning him in connection with this drug bust involving 435 grams of fentanyl and a “large amount” of crack.

Headline 5: Janoris Jenkins’ Brother had Dispute with Man Whose Body was Found on Jenkins’ Property

The body of Roosevelt Rene was found on the property of Janoris Jenkins while he was in Florida upon the completion of the New York Giants’ training camp. William H. Jenkins, the 34-year-old brother of Janoris Jenkins, allegedly had a dispute with Rene according to a police complaint released Thursday.

The complaint says William Jenkins got into an altercation with Rene on Monday night that resulted in Rene's death. Jenkins then fled and was arrested later Monday by the New York State Police on an unrelated matter and held in Ontario County Jail. Jenkins has been charged with one count of aggravated manslaughter and remains in custody. His brother has been advised by lawyers to remain in Florida.

Toronto Blue Jays’ closer Roberto Osuna was suspended 75 games without pay last Friday for violating Major League Baseball’s domestic violence policy. Osuna, 23, was arrested by Toronto police and charged with assaulting his girlfriend on May 8. He was placed on administrative leave by the league, which has been investigating the incident ever since.

Osuna will not appeal the suspension retroactive to May 8 and extending through Aug. 4. He will miss 89 days, which would cost him about $2.54 million of his $5.3 million salary. Osuna will plead not guilty to the charges on July 9, according to his attorney.

Let’s try something new with a segment we’re calling Foul Play-by-Play Feelings, where we talk about our feelings and the feelings of those crying foul play in sports.

Sweden coach Janne Andersson complained about the German bench for "rubbing in" their victory as they celebrated Toni Kroos' stoppage-time winner in Germany's 2-1 World Cup win on Saturday. There was a confrontation between members of both teams on the sideline at midfield, with gestures allegedly made, and the two groups had to be separated.

Basically, the Sweden’s problem with Germany was that they celebrated in front of their bench and allegedly directed gestures towards the Swedes, for which the Germans apologized. But we all know what an apology’s worth given Jameis Winston’s recent attempt.

Personally, I think these Swedish soccer players need to play some baseball to realize what a real walk-off loss feels like, because in that game they don’t even wait for you to get to your bench before celebrating. They celebrate right in front of you while you’re still on the field, hopefully tossing a bat like Jose Bautista and staring down your pitcher. They celebrate on the way to first base! What do you think? Are these Swedish soccer players softees or were the Germans in the wrong, because if there was more of this after soccer matches I’d be more likely to watch them.

This week's Foul Play-by-Play episode determines if the NFL went far enough with its three-game suspension of Jameis Winston for allegedly groping an Uber driver two years ago and $2.75 million fine of outgoing Carolina Panthers owner Jerry Richardson for sexually harassing female employees. Foul Play-by-Play is written, produced and hosted by Anthony Varriano, with co-host and attorney Michael Haase
More in this category: « The trades that get LeBron James back to Miami NFLPA Challenges Anthem Policy; NFL Seeks End to Kaepernick's Collusion Case Before it Begins »
back to top