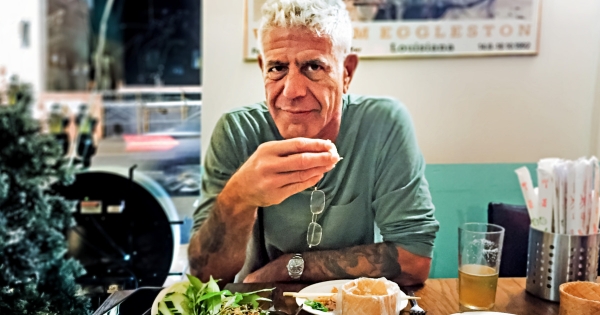 Anthony Bourdain, the famous world traveler, chef and Parts Unknown host was found dead in his room at Le Chambard, a luxury hotel in eastern France. The cause of death was hanging and local prosecutor, Christian de Rocquigny du Fayel said there was, “no reason to suspect foul play.”

Another tragic loss to suicide. I did not know Mr. Bourdain personally, but like most folks, I knew all about his world travels from his really fantastic CNN show - Parts Unknown.

I certainly don’t know what haunted Mr. Bourdain enough to take his own life so I won’t speculate. He leaves behind him a daughter, family, friends and legions of fans. It’s odd to think, “But he seemed like he was so happy - on TV!” Right? We like to think that we know people because we see them on TV, or in films, or through social media. We don’t.

His death, it seems has shocked Mr. Bourdain’s friends and colleagues. Usually, there are warning signs of depression and / or other things before an apparent suicide attempt. It really sounds, from what I’ve read, that no one had any idea he was suffering from whatever it was that drove him to take his own life.

Mr. Bourdain’s long time girlfriend, the actress, activist Asia Argento released a quick statement saying he was, “my love, my rock, my protector … I am beyond devastated.”  Condolences seem to be coming in from all over the world which shows the vast reach of lives Mr. Bourdain has touched.

While suicide, or even a high suicide rate is nothing new in densely populated cities. In the US, the suicide rate has dramatically risen, with some states having an increase of 30% over previous decades. Nevada was the only state to report a decline (of 1%) while North Dakota reported a staggering increase of 57%. The report finds all sorts of factors as the cause - mental health, public health, addiction, alcoholism, economic hardship - to name a few. Just last week the fashion industry lost Kate Space who was unknown to me but was something of an icon in her field. And today we’ve lost Anthony Bourdain. Sadly, we all know it won’t be long before we lose someone else.

And suicide makes people - angry at the victim. And I understand. Bourdain’s long time friend, actress Rose McGowan broke down crying in a now deleted clip where she flat out screams at him that she’s “So mad at you.”  Suicide is selfish. And I would probably feel the same way if a close friend of mine committed suicide. But I find it hard to judge someone I don’t know. So all I feel about Mr. Bourdain’s suicide is a tinge of sadness at a life lost too soon. He was only 61 years old and he certainly had a lot more to offer the world. Or maybe he didn’t. We just don’t know the struggles people face.

And so I can only offer the exact thing that everyone else is offering. Words.

More in this category: « Charley Jones comes to GCN Doggie Dictionary: 19 ways your dog speaks »
back to top