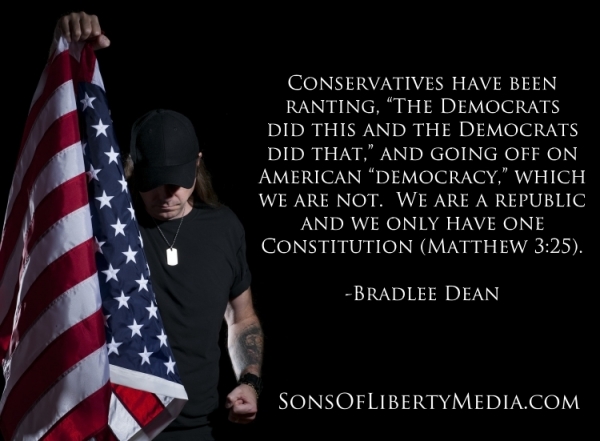 What a powerful statement. Yet, how true it is.

Do you remember when the Architect of Romneycare, or Obamacare, Jonathan Gruber said, “This bill was written in a tortured way to make sure CBO did not score the mandate as taxes… Lack of transparency is a huge political advantage… And basically, call it the stupidity of the American voter or whatever, but basically that was really, really critical for the thing to pass.”

Do you recall when the late Senator John Glenn said, “Americans just want us…not to be concerned if they can be constitutionally justified…Why if we had to do that (Follow the rule of the Constitution), we could not enact most laws we enact around here.”

There’s no better way to make slaves out of men than to pervert and reverse law, and to redefine their history by allowing the corrupt to lead the way (Matthew 15:14).

This week, I noticed a live feed that was posted from the American people that stated, “The Democrats did this and the Democrats did that,” and going off on American “democracy,” which we are not.  We are a republic and we only have one Constitution (Matthew 3:25).

“There is nothing which I dread so much as a division of the republic into two great parties, each arranged under its leader, and concerting measures in opposition to each other. This, in my humble apprehension, is to be dreaded as the greatest political evil under our Constitution.” -President John Adams Article 4, Sections 4, US Constitution (Jeremiah 5:21)

Then another conservative asked, “Who is worse, Korea, Russia, Syria….etc.?”

The suggestion is that the corrupt politicians who are allowed to run counter to American government under the guise of American government, somehow or another must be telling you the truth when they go to war with an alleged third world dictator. These are the same people who continuously advocate what God condemns, such as lying (Exodus 20:16), stealing (Exodus 20:15), sodomy (Leviticus 18:22; 20:13), redefining marriage, pedophilia (Exodus 22:23) and the sanctioning of the murder their own children (Proverbs 6:17).

“Every war when it comes, or before it comes, is represented not as a war but as an act of self-defense against a homicidal maniac.

In our time political speech and writing are largely the defense of the indefensible. But if thought corrupts language, language can also corrupt thought.

All the war-propaganda, all the screaming and lies and hatred, comes invariably from people who are not fighting.

Political language...is designed to make lies sound truthful and murder respectable, and to give an appearance of solidarity to pure wind.

War against a foreign country only happens when the moneyed classes think they are going to profit from it.

Nationalism is power hunger tempered by self-deception. War is peace. Freedom is slavery. Ignorance is strength. (On the manipulation of language for political ends.) We have now sunk to a depth at which restatement of the obvious is the first duty of intelligent men. If liberty means anything at all, it means the right to tell people what they do not want to hear. In times of universal deceit, telling the truth will be a revolutionary act.”  -George Orwell

Furthermore, just ask former US diplomat, National Security Advisor and Secretary of State Henry Kissinger as to what his corrupt take on the military men are that fight those wars.

Military men are “dumb stupid animals to be used as pawns for foreign policy,” he said.

On March 10, 1975, after meeting with the Turkish foreign minister in Turkey, Kissinger said, “The illegal we do immediately. The unconstitutional takes a little longer.”

The above said are the “grown-ups,” the adults. This is just the tip of the iceberg when it comes to their genius (Romans 1:22).

After speaking at 360 high schools and a number of colleges nationwide, it never ceases to amaze me that these young people know more than those who founded this country and established the rule of law to keep us free (Psalm 119:45).  How could this be? It is what has been allowed by the parents who have delivered their children to be taught by a bunch of dumbed down “Useful idiots,” who have been appointed to indoctrinate (Luke 7:35).

The Testimony of Bradlee Dean trailer

Then again, they are simply the fruit of the media that they continuously denounce as “Fake news.”

"The TV is my shepherd"

The result is that they are creating people smart enough to repeat what they are told, to follow orders, and dumbed down enough to think this makes them smarter than everyone else.

Look at what they are teaching illegally in American indoctrination centers, known as public schools.

They are Teaching What in Public Schools?

Public Schools are Teaching What?

More in this category: « Heineken’s Amazing “Worlds Apart” Ad Draws Overwhelming Praise (and a little controversy) Vikings’ Rick Spielman is the funnest GM to watch work on draft day »
back to top