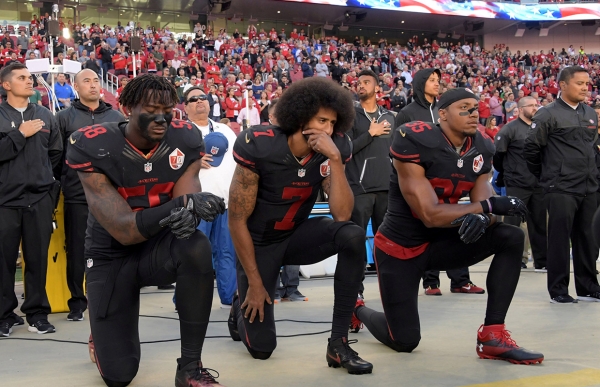 Without including a single player or union rep, the NFL has finally decided on a formal policy in regards to player protests during the National Anthem. NFL owners have decreed that players must stand during the anthem to show “respect;” however, there is an option for players to remain in the locker room.

Also, each team will be able to decide if there should be any discipline for a player protesting on the field during the anthem. Finally, the NFL will be able to fine a team (not a player) if any of the team’s said players protest on the sideline.

I have mixed feelings about the policy. On one hand, the NFL is a company and the players are employees within. And, in a regular business setting the company has the right to determine specific policies that employees must adhere to - dress code, workplace conduct, tardiness policies, etc, etc. Let’s face it, if your boss tells you that you have to wear a tie - and you decide to never wear ties - don’t be surprised when you’re fired. Because, a company should have some rights in deciding how their employees represent the company.

On the other hand, the NFL protesters are, by and large - black folks. And NFL owners are, by and large - white dudes. Which means we now have yet another policy where white dudes tell black folks what is appropriate for them to do and not to do. Which, is kind of tiresome. (Also, racist and gross.) And I'm not even getting into the inherent idea that, a person in a truly free society doesn't need to "respect the flag." Someone with the right of free speech is allowed, legally, to not stand and be forced to "respect the flag." It is literally their constitutional right to chose to stand or not, or to sing the anthem or not, and / or to show "respect" for the flag / anthem - or not. I am using a common sense attachment to the word "respect" but, yes, we could also quibble about "what does respect mean, anyway?"

On the other hand, again, as employees of the NFL, the company might be within their rights to say, "As employees of our company - you must stand and sing the national anthem." On the other hand it's not like the NFL has any competition. So, let's say a player says, "Well, free speech is in the constitution and therefor legal, and if your company policy takes away that right from me - then I quit and I'll take my talents elsewhere!" It's not like they can work at some other professional American football league. Their options are kind of limited.

I've already seen the Facebook rage begin. Even on my feed I have friends railing against the ruling and calling for an NFL boycott. I mean, first there was the ludicrous idea that the NFL was going to impose a 15 yard penalty on any team kneeling for the anthem. Which produced some online rage. Thankfully, it looks like that idea was shot down. But still - the very idea of it is insulting to reasonable thought. And now the idea that players can be fined - for exercising their constitutional rights - is burning some folk's britches. And I totally understand.

On the other hand - players are employees of a company who should have some say in how their employees represent them. Maybe. Right? Or is the policy too far? I honestly don't know. Some folks on Facebook clearly think they have the answer. Maybe they're right!

Or maybe they're overreacting.

Anyway, I hate to be wishy washy on the policy but I have mixed feelings about it. To be clear - I don't have mixed feelings about the obvious racial component. The new NFL policy is absolutely designed to make white Americans feel more comfortable watching the NFL. I mean, let's face it - if there is one thing that scares the F out of many white people, it's black folks exercising their constitutional rights and pushing for social change.

I mean, peacefully protesting by kneeling quietly during the national anthem seems pretty benign, right? This probably shouldn't even be a national issue. But it is. Such is the 'Murica we currently find ourselves in.

To be honest, I prefer the NFL's previous policy of - players are free to exercise their free speech. Or not. It's up to them. And I hate the racial component of this policy but I keep getting stuck on - but the NFL is a company and the company should be allowed some say in how their employees represent - the company. But the rage is building and I honestly don't expect the NFL to keep this policy.

The NFL Players Association (NFLPA) had this to say about the new policy: The 32 member clubs of the National Football League have reaffirmed their strong commitment to work alongside our players to strengthen our communities and advance social justice.  The unique platform that we have created is unprecedented in its scope, and will provide extraordinary resources in support of programs to promote positive social change in our communities.

The membership also strongly believes that:

1.  All team and league personnel on the field shall stand and show respect for the flag and the Anthem.

2.  The Game Operations Manual will be revised to remove the requirement that all players be on the field for the Anthem.

3.  Personnel who choose not to stand for the Anthem may stay in the locker room or in a similar location off the field until after the Anthem has been performed.

4.  A club will be fined by the League if its personnel are on the field and do not stand and show respect for the flag and the Anthem.

5.  Each club may develop its own work rules, consistent with the above principles, regarding its personnel who do not stand and show respect for the flag and the Anthem.

6.  The Commissioner will impose appropriate discipline on league personnel who do not stand and show respect for the flag and the Anthem.​