Rural, tribal casinos have most to gain from legal sports gambling 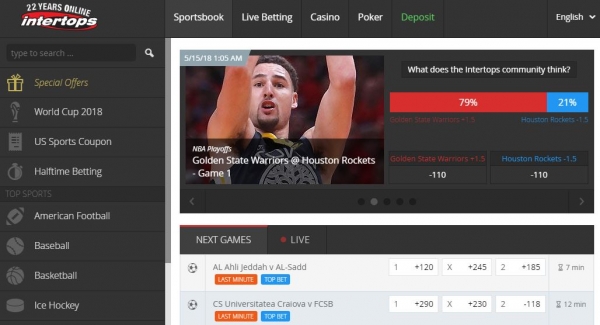 Intertops is one of the many online sportsbooks operated overseas and allowing Americans to illegally bet on sports. Their business is bound to be negatively effected by the United States Supreme Court's decision to allow states to determine whether they want legalized sports gambling. Anthony Varriano screenshot

The United States Supreme Court ruled to strike down the Professional and Amateur Sports Protection Act (PASPA) by a 6-3 vote. The 1992 law barred state-authorized sports gambling, with Nevada being the sole exception.

The ruling allows states to determine whether they want to allow gambling on sports. While New Jersey expects to have sportsbooks open prior to the start of the NBA Finals, Delaware, Mississippi, New York, Pennsylvania and West Virginia are all prepared to get into legal bookmaking. But Indian nations could beat even those states to market.

Casinos on Indian reservations could theoretically open sportsbooks today because they are sovereign nations. The 1993 Nation-State Gaming Compact authorizes the Oneida nation in New York to adopt any gaming specification that is permitted without any further approvals by the State. They intend to open a sportsbook as soon as possible, but other tribal nations are taking a cautious approach.

The reason behind the cautiousness is the fact sports wagering isn’t all that profitable for casinos. According veteran Nevada sportsbook operator Art Manteris, sportsbetting “generates only a four- to six-percent margin, is labor-intensive and requires a major capital investment,” according to a story by Dave Palermo of Legal Sports Report.

Consider this: “From March 2015 to February 2016 a Nevada Gaming Control Board Gaming Revenue Report shows that the “total gaming win” (the casino’s win) over twelve months from slots was $7,066,306,000 (about 7 billion) total. Meanwhile, the total table games win was $4,094,401,000 (about 4 billion). The implication of this is that, even with sports gaming’s comparatively small return of $19,236,000 (about 19.2 million) considered, no casino game even comes close to slots in terms of revenue for the casino.” That’s according to Fact/Myth.

Palermo reports that “16 percent of the tribal casinos – many in urban areas – generate 71.5 percent of the $31.2 billion industry, according to senior economist Alan Meister of Nathan Associates.” These urban, tribal casinos might not have much reason to venture into sports betting since any dollar spent at the sportsbook instead of in a gaming machine is more likely to result in a loss and will certainly result in smaller margins of return.

But rural, tribal casinos could see sports betting as an opportunity. Places like 4 Bears Casino and Lodge in New Town, N.D. could supplement its revenue used to fund the needs of reservation residents by providing the first online sportsbook for North Dakotans.

While the consensus of casino experts seems to be that the estimated $140 billion per year illegally wagered on sports in the U.S. according to the American Gaming Association (AGA) is overestimated, there’s tons of money to be made by a score of entities outside the gaming industry.

NBA Commissioner Adam Silver wants his league to get one percent of all bets made on its games. Local newspapers and radio entities in states with legal sports gambling will now be able to provide content related to sports gambling instead of dancing around the subject. Most importantly, though, most of the billions of dollars Americans have stashed with online bookkeepers overseas will find its way back to the states and stimulate the American economy. I say most because these online bookkeepers overseas have been fraudulent in the past.

The Supreme Court decision is long overdue given the amount of revenue that could be raised by state and federal governments simply from administering a sin tax on gambling. Twenty states have already proposed bills to legalize sports gambling.

If you like this, you might like these Genesis Communications Network talk shows: USA Prepares, Building America, Jim Brown’s Common Sense, Drop Your Energy Bill, The Tech Night Owl, Travelers411, What’s Cookin Today

More in this category: « Foul Play in Sports: Legalized Sports Gambling, Anthem Protests, and Robinson Cano Cheats Opinion: I don’t watch the NBA Playoffs for the same reason I despise American capitalism »
back to top