Made in America: Transportation made in the U.S.A. 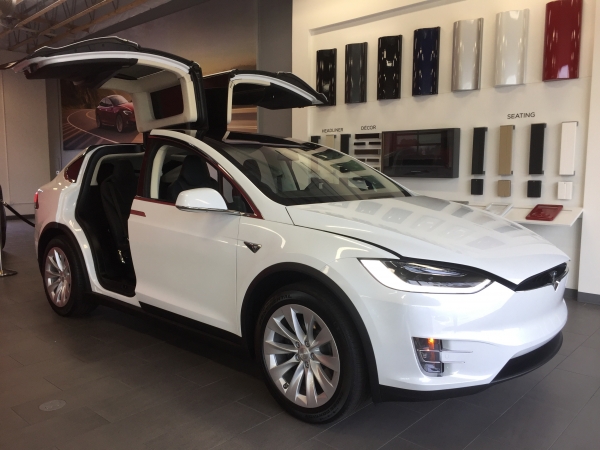 The Tesla Model X is displayed in Tesla's Las Vegas Showroom. The Tesla Model 3 will be the most American-made automobile when it debuts in the middle of 2018. Anthony Varriano photo

So you’ve built the all-American home, furnished it with American-made appliances and furniture, filled the fridge with food made in the U.S.A. and use American energy sources to run your appliances, lights and heat. But America is vast, and you want to see it all.

If you tried to travel 2,680 miles in any direction in almost any country, you’d end up in an ocean. But not in America. The U.S.A. is known for its diversity, both demographically and geographically. That geographic diversity wouldn’t be possible if America wasn’t the third largest nation. That vastness requires transportation solutions in order for Americans to see their nation.

When you’re not going far, you can walk in American-made shoes. I would recommend Keen for all-purpose shoes. I’ve been wearing a pair I got at an REI garage sale for about five years. Red Wing and Wolverine make the best boots money can buy. My dad has worn Red Wing boots to work for over 40 years and has a pair of Wolverine galoshes for wet days. Schnee’s in Bozeman, Montana, makes the best hiking boots I’ve seen. There aren’t many options for sneakers made in America, but SOM Footwear is one, and some of the previously mentioned companies have expanded their catalog to include a few pairs of everyday shoes. If you prefer to bear your feet and walk like Jesus, Okabashi makes 100-percent recyclable sandals and flip-flops right here in the U.S.A.

Bicycles Made in the U.S.A.

You really can bike from one edge of America to the other. People do it every summer for about $5,000. It’s understandable if that’s not your idea of fun, but I urge every American to bike to work or the store when they can. It will save you money, and it’s great for Americans and America, especially if you do it on an American-made bicycle.

I haven’t owned a bicycle made in the U.S.A. since I was a kid because Huffy has since moved its factories to China. Even great bikes like Surly have their components made in Taiwan and are only constructed in Minnesota. But since I can’t recommend an American-made bicycle, Inside Hook has provided a recent list of the top five bicycles made in America. Firefly is the only one on the list I recognize.

I take public transportation as often as I can because it’s better for the environment and employs nearly 400,000 Americans, according to the American Public Transportation Association. Think about this: every person on a bus or train is generally one less car on the road. It’s the easiest way to decrease car traffic and emissions, so we can continue to breathe clean air.

Public transportation is also incredibly convenient. I have a bus stop just down the street from my house, and I can ride one bus all the way from the Mall of America to Target Field in less than an hour for less than $2. I can even load up my bike and ride to and from the bus. I even get to read while riding a bus or train, so I’m using that extra time more constructively. But 45 percent of people don’t have access to public transportation because it’s not available where they live, which is why we own so many automobiles. (If you’d like to remedy the lack of public transportation access in America, visit Voices for Public Transit.)

I’m not one to use personal experience to make an argument often, but if you don’t think General Motors makes a quality car, say that to my face when I’m behind the wheel of my 1957 Chevy 210. Toyota exported its first car, the Toyopet Crown, to America in 1957. A CNN Money slideshow informs that “Toyota soon recognized that the Toyopet really didn't warrant being taken seriously, whatever it was called. It was underpowered, uncomfortable, lacking in even basic amenities, and it cost more than better offerings from European competitors.”

From the Crown Wikipedia page: “As a publicity stunt to demonstrate the car's reliability, Toyota staged a campaign common to American automakers: a coast-to-coast endurance run from Los Angeles to New York. The Toyopet was barely able to limp into Las Vegas before the project had to be called off.”

It doesn’t matter what decade, American automakers have made higher quality cars than their foreign competition. This list of former Motor Trend Car of the Year award winners proves it, with American automakers taking down 55 awards to the rest of the world’s nine. General Motors led the pack with 26 awards, Chrysler and Ford each scored 14, AMC added two and Tesla picked up one. Leading the rest of the world was Volkswagen with a whopping three awards, Toyota and Nissan had two, Honda and the French car company Citroen had one each. That’s right: AMC has the same number Motor Trend Car of the Year awards as Toyota and Nissan, and twice as many as Honda.

Again, if you don’t think American automakers make quality cars, consider my 2004 Ford Taurus with over 202,000 miles, no body rust, no interior damage and no major issues. I’ve replaced the starter and AC pump. That’s it. Compare that to my dad’s 2007 Mazda with 120,000 miles and body pieces falling off due to cheap, plastic clips holding it together. Consider my father’s 2005 Ford F-150 with over 180,000 miles. He just put significant money into it for the first time, replacing the front end when his four-wheel drive went out during one of the snowiest winters Eastern Montana has seen in decades.

According to Roger Simmermaker’s How Americans Can Buy American: The Power of Consumer Patriotism, “When you buy an American-made Chevy, you not only support more American workers, you also support American investors, owners, and stockholders. When you buy an American-made Toyota, you may help your Uncle Bob if he’s on Toyota’s payroll, but you’re hurting Uncle Sam since American companies pay about three times as many taxes to the U.S. Treasury as do foreign-owned companies.” That doesn’t even include the insane amount of tax breaks foreign automakers have gotten to open production facilities in the U.S.A.

From Forbes: “Alabama offered Mercedes-Benz more than $250 million worth of tax breaks, training and land, and South Carolina won BMW’s only U.S. plant with state incentives worth more than $130 million, according to a 2008 report by the University of South Carolina Moore School of Business. The gifts to Kia that helped win the plant for Georgia total more than $258 million.”

Most importantly, American automakers employ more Americans -- nearly three times more than foreign automakers as of 2012. The jobs putting the cars together aren’t the only ones that matter, though. Plenty of materials go into making a car, so the more materials used that are made in America, the more American jobs are created. Simmermaker cites a 2002 Business Week story that states “each auto-assembly created by an American company also creates 6.9 other American jobs, where each auto-assembly job created by a foreign company creates only 5.5 other American jobs.”

While there isn’t a car entirely made in America, the Tesla Model 3 is likely to become the most American car on the road, with 95 percent of its parts made in the U.S.A. You can find out how much of each 2013 car was made from materials made in the U.S.A. by visiting here. No surprise, General Motors tops the list, with Ford and Chrysler filling out the top 10. Toyota has the only foreign car in the top 10, and Chrysler is now Italian-owned.

So I hope the next time you’re buying a car, whether new or used, you buy American, because you’re supporting American jobs when you do.

More in this category: « Erin Moran Had Been Battling Stage 4 Throat Cancer – Your Questions Answered The Love Curse of the MN Vikings: Open Letters to Bradford, Bridgewater and Peterson »
back to top