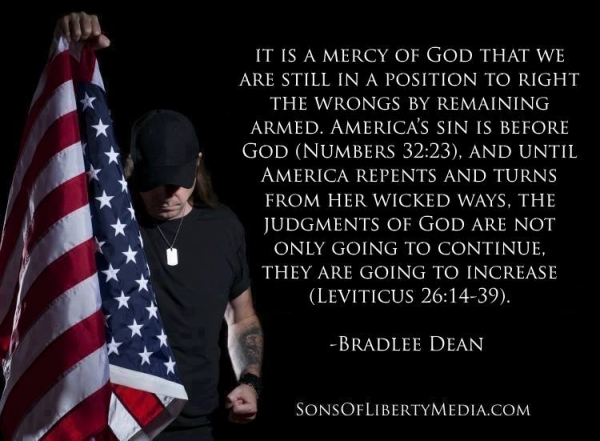 “The main obstacle to a stable and just world order is the United States.” -George Soros

First of all, I would have you note that the headline does not suggest that because we, as a people, are armed that God is going to put an end to judging this nation (Psalm 9:16). In fact, just the opposite is true.

Yet, it is a mercy of God that we are still in a position to right the wrongs by remaining armed. America’s sin is before God (Numbers 32:23), and until America repents and turns from her wicked ways, the judgments of God are not only going to continue, they are going to increase (Leviticus 26:14-39).

With that said, the propagandists were hard at work this last week, as well as every week attempting to brainwash the American people with more anti-gun and false polling rhetoric.

One headline in Minneapolis was “Majority of Americans want tighter gun legislation.”

Really? A majority of Americans want tighter gun legislation? I do not care if 100% of the American people want to disarm themselves before their enemies, America is a Constitutional Republic (Article 4, Section 4), not a democracy.  We are ruled by Law, not the opinion of any media-contrived polling of the majority of people in this country.

Yes, friends, these polls are bought and paid for. Just ask those corporations that attempt to rule the roost through deception.  These are the same CIA-controlled, anti-gun media outlets, though they are separate companies, which are pushing the same propaganda on the American people on a daily basis.

To prove the point, look at the facts!

According to the Geneva-based Small Arms Survey – the leading source of international public information about firearms – the U.S. has the best-armed civilian population in the world, with an estimated 270 million total guns.

That’s an average of 89 firearms for every 100 residents.

Furthermore, it is interesting to note that whenever more gun legislation is broadcasted, gun sales skyrocket.

And if the media cannot convince you that a majority of Americans want more gun legislation through deceptive measures, then they will have some appointed, unelected, black-robed tyrant who sits on the Supreme Court pervert what we all clearly understand when it comes to our right to keep and bear arms.

“Do not separate text from historical background. If you do, you will and subverted the Constitution, have perverted which can only end in a distorted, bastardized form of illegitimate government.” –James Madison, the 4th President of the United States

“This week it was announced that hedge fund billionaire and radical left-wing activist George Soros has infused his Open Society Foundations with a gift of $18 billion.”

According to a New York Times report, Soros funneled the money to the organization over the course of several years.  The paper also called the Hungarian immigrant’s gift, “One of the largest transfers of wealth ever made by a private donor to a single foundation,” and pointed out that Open Society is now the second largest “philanthropic” organization in the U.S.

On the domestic front, in 2000, Open Society published a widely circulated report entitled, “Gun Control in the United States.” The publication called for a host of new federal and state gun restrictions.

Americans have known for years what George Soros and others are all about, and still they stand by and act as if he has a lawful right to attempt to strip Americans of their right to keep and bear arms.  If Americans do not want to know any better by educating themselves, then they simply will be disarmed (Hosea 4:6).  Either you deal with the corrupt politicians (Which will close the door and enforce the law against the George Soros’ of the USA) or you will be disarmed.

More in this category: « After 40 years, the original Night Stalker has finally been caught The best and worst of the 2018 NFL Draft's first round »
back to top