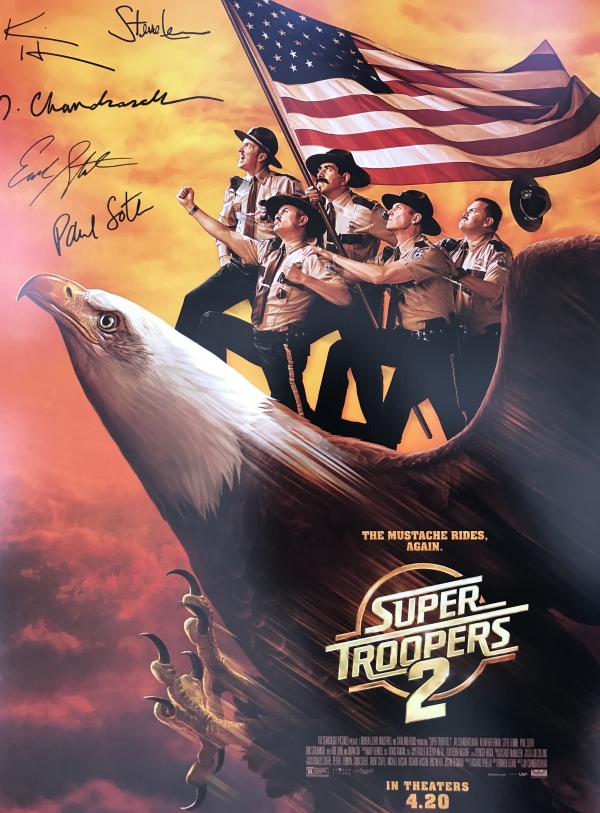 Super Troopers 2 is a hilarious buddy-cop comedy that measures up to contemporary comedies released since the original Super Troopers. Anthony Varriano image

It has to be hard to be Broken Lizard. Like the Farrelly Brothers starting their careers with the comedy classic Dumb and Dumber (1994), Broken Lizard started their careers with a comedy classic of their own in Super Troopers (2001). But unlike the Farrelly Brothers, the members of Broken Lizard also act in their films, which has made it more difficult for them to find continued success as a film cooperative. Not only does the production company  have to deal with being pigeonholed as a low-brow, comedy specialist, but its members also have to deal with their own case of Jon Heder syndrome. Heder’s the guy who played Napoleon Dynamite and hasn’t been able to escape it since.

That’s why Broken Lizard’s follow-up to Super Troopers was so hard to watch. Before I knew Club Dread (2004) wasn’t any good, I had a hard time accepting the members of Broken Lizard in their new roles. By the time Beerfest (2006) came around, though, I had accepted the fact there might never be a Super Troopers 2 and could understand why. That’d be like asking F. Scott Fitzgerald to write a sequel to The Great Gatsby, or more on topic, asking the Farrelly Brothers to do a sequel to Dumb and Dumber immediately after its release.

It took 20 years for the Farrelly Brothers to commit to Dumb and Dumber To, so we should all be thankful it only took Broken Lizard 17 years to give us Super Troopers 2. Jay Chandrasekhar, Steve Lemme, Kevin Heffernan, Paul Soter and Erik Stolhanske are back where they belong, portraying Vermont Highway Patrolmen in a cop comedy that pokes fun at the state of the United States and Canadian culture.

The first rule of reviewing a sequel is not comparing it to its predecessor. Very few sequels are as good as the original, and Super Troopers 2 is no exception. Holding it to the impossible standard only realized by The Godfather: Part II and The Empire Strikes Back is unfair.

You should definitely see Super Troopers 2. You’ll laugh enough to forget that you’re basically watching the same plot as the original except to the music of Eagles of Death Metal instead of .38 Special, which is a treat. You’ll get some laughs out of Rob Lowe playing a former, minor league hockey player turned mayor, and you’ll no doubt enjoy the pranks pulled by and on the Canadian mounties competing with the Super Troopers to keep their jobs. The story is far-fetched at best, but the situations created by the story are worth taking the leap.

Super Troopers 2 is a hilarious buddy-cop comedy that measures up to contemporary comedies released since the original Super Troopers. Fox Searchlight