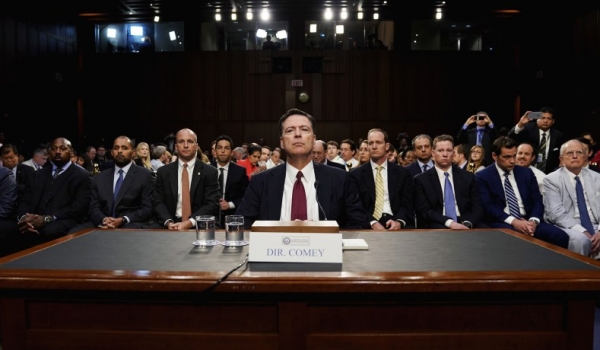 So our President is a mafia boss, an unethical liar and “morally unfit” to be leading the country. At least that’s the opinion of former FBI chief James Comey. In his recent interviews, Comey also has a problem with Donald Trump’s orange skin, his ties that are too long, and even the size of his hands. Really important stuff from the nation’s former top cop.

If you have never heard of James Comey, he was FBI director under the Obama Administration, but was fired just after Trump took office. Since then he seems to have worked overtime in cultivating an image of being the only Boy Scout left, standing head and shoulders above politics and the politicians in Washington. So just what is he trying to accomplish?

I know well. You see, as many of you recognize, I’m a book publisher. I sell books through my company The Lisburn Press.  And that’s exactly what Comey is doing.  He has written a tell-all tabloid story on Trump of supposed salacious charges that question everything from Russian hookers to inquiries about the president’s marriage. Yes, it’s all about selling books and making money.  Georgetown law professor Jonathan Turley writes this week, “Comey is selling himself with the vigor of a Kardashian, and while proceeding to write a book to protect the FBI, he is doing that institution untold harm by joining an ignoble list of tell-all authors.”

Anyone following high profile public issues in Louisiana is certainly aware of how Comey bungled the biggest case he ever handled embroiling a former LSU professor. The incident involved anthrax attacks in the nation’s capital that killed 5 people and infected 17 others, causing the entire U.S. Capitol’s mail system to shut down. Comey headed up the FBI investigation, and his incompetence and recklessness all but destroyed the reputation and health of LSU researcher Steven Hatfill.

It’s a long and convoluted story, but it was obvious to any neutral observer that Hatfill was innocent and the FBI had the wrong man.  He was a virologist (one who only studies viruses), and he never even handled anthrax.  But congress was screaming about an attack on America and the FBI needed a scapegoat. A few unreliable rumormongers mentioned Hatfill’s name that led Comey and Company to pounce all over the blameless researcher.

So just what evidence of Hatfill’s guilt did Comey have on the quiet LSU academic?  Ah, don’t sell Comey short.  After all he had heard of a couple of guys out in California that had trained bloodhounds to supposedly “sniff out” anthrax.  Now remember, if you sniff the stuff, it kills you, but that minor fact did not deter Comey. He siced the bloodhounds on Hatfill and announced to congress that one of LSU’s best and brightest was the guilty party. The dog handlers were later found by a California court to be quite unreliable, with the judged stating that the prosecution’s dog handler was “as biased as any witnesses that this court has ever seen.”

But Comey persisted. When he was asked by a skeptical Deputy Secretary of Defense Paul Wolfowitz if he was sure that Hatfill was the perpetrator, Comey replied that he was “absolutely certain” they weren’t making a mistake.

Seven years later, Hatfill was exonerated and the FBI paid him $5.85 million because of Comey’s unjust prosecution. But he did not have the decency to apologize and acknowledge his serious blunder.  Comey’s sidekick, current special prosecutor Robert Mueller was just as graceless and unprofessional as Comey. When asked about the false charges against Hatfill, Mueller would only say: “I do not apologize for any aspect of the investigation.” He added that it would be erroneous “to say there were mistakes.”

Comey did his best to destroy a decent and innocent LSU professor. He has proven to be manipulative, incompetent and calculating. But hey, so what!  It’s really all about selling books, isn’t it.

More in this category: « Marijuana medical benefits may be strain specific How Republicans are using the 2020 census to their advantage »
back to top