Biblical and constitutional illiteracy is the recipe for tyranny 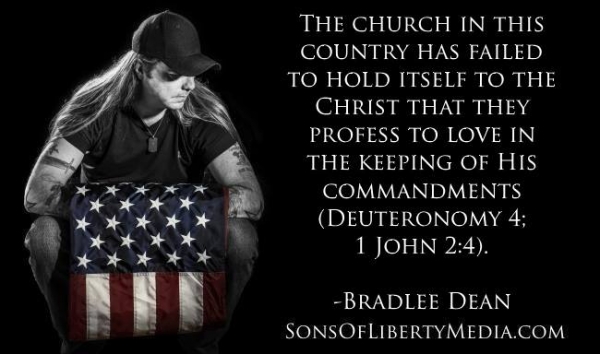 “It is in the religion of ignorance that tyranny begins.” –Benjamin Franklin

It seems that when covering this country from coast to coast in providing presentations from the House of Representatives to high schools, colleges, television, radio and every other outlet which we are able to take advantage (Luke 19:10) when the opportunity is offered, there is this recurring theme of ignorance when it comes to the history or where it is that “We the People” came from, and who it is that we are as a people.  In other words, ignorance of our American history starts with Biblical and constitutional illiteracy.

I can say with all confidence that if you do not know where it is that you came from, then you have no idea as to where you are going.  It all starts in the American Church that is to be the moral compass of society. When that goes, so goes the government (Matthew 5:14-16).

Think of this, you now have the impotent hirelings in American Churches (John 10:13) unscripturally and heretically (1 Timothy 4:1) teaching (out of context) that the sheep are to submit themselves to tyranny (the wolves) in American government by teaching Romans chapter 13 upside down.

“Make yourself sheep and the wolves will devour.” –Benjamin Franklin

Of course, there would be no conversation on this topic if Christians would simply go to the preceding verse found in Romans 12:2 where it simply reads:

“Do not be overcome by evil, but overcome evil with good.”

We are now seeing in this country an unprecedented level of corruption within government ranks with an 11% approval rating.  This first begins in the church.

Why? The church in this country has failed to hold itself to the Christ that they profess to love in the keeping of His commandments (Deuteronomy 4; 1 John 2:4).

Is the world to know a just and a holy God through an uneducated, ignorant, disobedient and hypocritical lot of cowardice unbelievers? I think not! Though the God of Israel will set the record straight through judgment, though He desires to show mercy (Ezekiel 18:23), and that just happens to be the course that this country has clearly and willfully taken (Jeremiah 5:20-31).

America is going to learn the hard way.

Pulpits across the country today are the greatest advocates to the crimes against Heaven and the corruptions found in American government and society. Instead of the American Church confronting sin (1 Timothy 5:20) and corruption, it has now ignorantly taught that Christians are to submit to corruption in government (Matthew 16:18).

But they cried out, Away with him, away with him, crucify him. Pilate saith unto them, Shall I crucify your King? The chief priests answered, We have no king but Caesar. (John 19:15).

How far this teaching is from that of the first, The Bible, and secondly, our forefathers and our Constitutional Republic form of government, which they established.

“Let every soul be subject unto the higher powers. For there is no power but of God: the powers that be are ordained of God. (Who ordained that power?)  Whosoever therefore resisteth the power, resisteth the ordinance of God: and they that resist shall receive to themselves damnation.  For rulers (representatives) are not a terror to good works, but to the evil. Wilt thou then not be afraid of the power? do that which is good, and thou shalt have praise of the same:  For he is the minister of God to thee for good. But if thou do that which is evil, be afraid; for he beareth not the sword in vain: for he is the minister of God, a revenger to execute wrath upon him that doeth evil.”

I have searched Scripture high and low looking for Scripture that would support the Lord God of Israel having His children to submit to unjust rule, and, of course, I could not find it!

As a matter of fact, what I did find was quite the opposite.

For example, I found that Moses was sent forth to confront the Pharaoh and commanded him, by God, to let His people go (Exodus 5:1).  In the end, the Lord brought forth judgment upon judgment upon the head of Pharaoh and all that pertained to him and his people through plagues (Exodus 7:1-4).

What of the lone prophet, Elijah?

Elijah was sent by God to confront the tyrant Ahab and his wicked wife Jezebel to meet on Mount Carmel where the fire from Heaven would bring destruction to the false prophets (1 King 18:36-40).

Do you remember what the tyrant king Ahab said to Elijah before going to Mount Carmel?

“And it came to pass, when Ahab saw Elijah, that Ahab said unto him, Art thou he that troubleth Israel?

(Here Ahab is accusing Elijah for the things that he and his wife were guilty of) And he answered, I have not troubled Israel; but thou, and thy father's house, in that ye have forsaken the commandments of the Lord, and thou hast followed (false god) Baalim.” 1 Kings 18:17-18

What of Shadrach, Meshach and Abednego, who would not bow to the image of gold that King Nebuchadnezzar created? They were thrown into the fire for their lack of submission to the tyrant, and at a short length, because they did not bow, they did not burn, and sure enough the fourth man, the Son of Man, appeared on their behalf to the glorifying the God of Israel.

“Then Nebuchadnezzar spake, and said, Blessed be the God of Shadrach, Meshach, and Abednego, who hath sent his angel, and delivered his servants that trusted in him, and have changed the king's word, and yielded their bodies, that they might not serve nor worship any god, except their own God.”(Daniel 3:28)

What of John the Baptist, “The greatest prophet born of woman?” (Luke 7:28) John confronted King Herod for all of his evils (Luke 3:19).

Or what of the Apostle Peter, who was put in prison because the tyrant Herod wanted to please the religious hypocrites of the day by imprisoning him.

Peter therefore was kept in prison: but prayer was made without ceasing of the church unto God for him.

And when Herod would have brought him forth, the same night Peter was sleeping between two soldiers, bound with two chains: and the keepers before the door kept the prison.

And, behold, the angel of the Lord came upon him, and a light shined in the prison: and he smote Peter on the side, and raised him up, saying, Arise up quickly. And his chains fell off from his hands.

And the angel said unto him, Gird thyself, and bind on thy sandals. And so he did. And he saith unto him, Cast thy garment about thee, and follow me.

And he went out, and followed him; and wist not that it was true which was done by the angel; but thought he saw a vision.

When they were past the first and the second ward, they came unto the iron gate that leadeth unto the city; which opened to them of his own accord: and they went out, and passed on through one street; and forthwith the angel departed from him.

And when Peter was come to himself, he said, Now I know of a surety, that the Lord hath sent his angel, and hath delivered me out of the hand of Herod, and from all the expectation of the people of the Jews.

I ask, who sent the angel to break Peter out of prison?

When I look to our forefathers who drew up that document called the Declaration of Independence, I see 75% of it is documentation of them candidly showing the world where they threw off tyranny when it came to the corrupt King George from across the pond and his usurpations which they would no longer tolerate. They wrote,

“That whenever any Form of Government becomes destructive of these ends, it is the Right of the People to alter or to abolish it, and to institute new Government, laying its foundation on such principles and organizing its powers in such form, as to them shall seem most likely to affect their Safety and Happiness.”

President Thomas Jefferson, the chief architect of the Declaration of Independence, exhibited in his writings and his life (1 John 3:18):

"Rebellion to Tyrants is Obedience to God"

Like that of Elijah, it wasn’t our forefathers that were troubling the country, it was the corruption in government that would not be ruled by God as they swore that they would be. That is where the trouble begins.

“The limits of tyrants are prescribed by the endurance of those whom they oppress.” –Fredrick Douglas

Bradlee Dean is a guest contributor to GCN news. His views and opinions, if expressed, are his own and do not reflect the views and opinions of the Genesis Communication Network. Bradlee's radio program, The Sons of Liberty broadcasts live M - Sat here at GCN. This opinion was originally published by Sons of Liberty Media at www.sonsoflibertyradio.com. Reprinted with permission.

More in this category: « Out of breath when climbing stairs? MoviePass: Two month review »
back to top