The cannabis user's guide to lobbying on 4/20 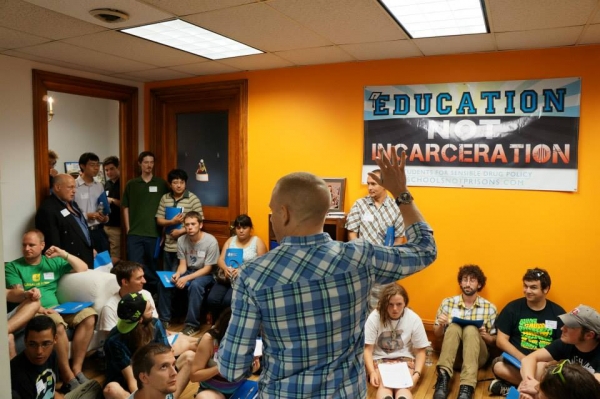 I was lucky enough to win a scholarship from Students for Sensible Drug Policy (SSDP) to lobby my representatives in Washington D.C. in June of 2013 to legalize cannabis federally. It was a most rewarding experience, and I picked up a few things at a lobbying training seminar led by then executive director of SSDP, Aaron Houston. So here’s the cannabis user’s guide to lobbying on 4/20.

You have to understand that your representative isn’t going to appreciate you wasting his or her time or the time of his or her staff with your drug-induced ramblings. Even if you are a capable orator under the influence, just the appearance or odor of being stoned can undo all your good work and that of your sober comrades.

Getting arrested for smoking a joint at your capitol doesn’t look good, either, so if you must smoke, stay at home on 4/20, where you can still submit a comment to the Food and Drug Administration to remove cannabis from the list of Schedule I drugs. The FDA is requesting interested persons to submit comments concerning abuse potential, actual abuse, medical usefulness, trafficking, and impact of scheduling changes on availability for medical use of five drug substances: the cannabis plant and resin, extracts and tinctures of cannabis, delta-9-tetrahydrocannabinol, stereoisomers of tetrahydrocannabinol and Cannabidiol. Comments are due by April 23.

The dress code for members of state congress is business professional, which is exactly what you should be wearing while working in their arena. That’s either a suit or a collared shirt, slacks, a tie and dress shoes for men, and a business suit or an appropriate blouse and skirt or dress for women. “Appropriate,” in this case, refers to an appropriate amount of naked skin displayed, which should never be used as a means to your end. You want your representative to respect you, not covet you.

You’re not just selling your stance; you’re selling yourself. There’s hardly an instance you’re not selling yourself, but in this case, it’s especially important to approach the lobbying of your representatives as you would a job interview. Your interviewers should want to have you back when you leave.

4. Appeal to the Heart, Not the Head

It might not seem like it at times, but politicians are people, too. They have family and friends they love just like you, and appealing to their feelings will force them to empathize with you. Tell them a personal story of why you use cannabis and how it has helped you. Make yourself the hero of your story and make it easily relatable.

For example: “I suffer from degenerative disc disease that causes chronic lower back pain. Upon being diagnosed at 23 years old, I was immediately prescribed opioids to manage the pain. The plan was to manage the pain until it became surgical, which is when the pain travels down the back of a leg and past the knee. It took a year for my pain to become surgical, and had I not applied for and received a medical marijuana prescription in Montana during that time, I’d either be addicted to opioids or dead.

Once I received my medical marijuana prescription I had no need for the opioids, the dosage of which had increased almost every time I needed a refill. Cannabis is a safer and healthier means of managing chronic pain than opioids, and research has shown that medical marijuana laws may reduce deaths from opioid overdoses.

But people are struggling with ailments and diseases for which medical marijuana prescriptions aren’t allowed, too. I am also an alcoholic, and I’ve been alcohol-free since October 4, 2017. But I couldn’t imagine kicking alcohol without cannabis, and I and thousands of other alcoholics don’t qualify for medical marijuana prescriptions to treat our disease. Instead, we’re called criminals for treating our disease in a safe and healthy manner. So cannabis, a drug that’s never killed a single soul, remains illegal while more than 1,000 Minnesotans die annually from alcohol.”

A cannabis prohibitionist needs a reason to change their mind on cannabis legalization. If they find out their alcoholic family member could quit drinking with the help of cannabis, they’d be more likely to adopt your stance than if you were to feed them a bunch of statistics about fewer fewer deaths in states where medical marijuana is legal.

5. Remember, You’re the Expert, Not Them

Your representatives are overwhelmed with legislation spanning a multitude of topics, so it’s unlikely they have a firm grasp on a specific topic unless it’s one of their campaign talking points. Given the reluctance of just about every politician to openly discuss cannabis, in almost every instance, you will know more about cannabis and the effects of cannabis prohibition than your representatives.

If you like this, you might like these Genesis Communications Network talk shows: America’s Healthcare Advocate, The Bright Side, The Dr. Daliah Show, Dr. Asa On Call, Dr. Coldwell Opinion Radio, Drew Pearson Live, Good Day Health, Health Hunters, Herb Talk, Cannabis A to Z

More in this category: « Opinion: Trump campaign more guilty than Facebook, Cambridge Analytica Out of breath when climbing stairs? »
back to top