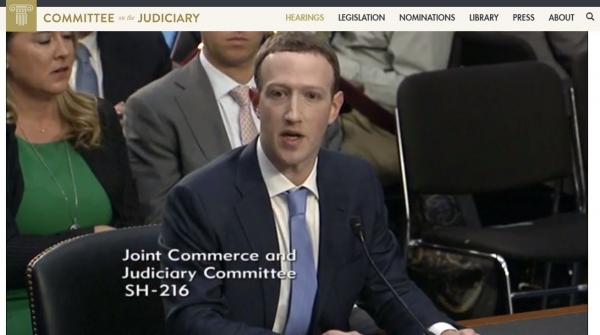 The question no one’s asking, however, is why a campaign calling to “Make America Great Again” by growing jobs and the American economy spent almost $6 million to employ an analytics firm in the United Kingdom with employees from the U.K. and Canada?

Facebook chairman and chief executive officer Mark Zuckerberg is testifying before Congress this week, but his prepared testimony is already available, and he won’t likely stray far from it regardless of the questions asked by the Senate Judiciary Commerce Committees at 1:15 p.m. CST on Tuesday and House Energy and Commerce Committee at 9 a.m. on Wednesday. Here’s what happened in Zuckerberg’s own written words.

“In 2014...we announced that we were changing the entire platform to dramatically limit the Facebook information apps could access. Most importantly, apps like Kogan’s could no longer ask for information about a person’s friends unless their friends had also authorized the app. We also required developers to get approval from Facebook before they could request any data beyond a user’s public profile, friend list, and email address.”

“In 2015, we learned from journalists at The Guardian that Kogan had shared data from his app with Cambridge Analytica...we immediately banned Kogan’s app from our platform, and demanded that Kogan and other entities he gave the data to, including Cambridge Analytica, formally certify that they had deleted all improperly acquired data -- which they ultimately did.”

“Last month, we learned from The Guardian, The New York Times and Channel 4 that Cambridge Analytica may not have deleted the data as they had certified. We immediately banned them from using any of our services. Cambridge Analytica claims they have already deleted the data and has agreed to a forensic audit by a firm we hired to investigate this.”

So the first thing we learn from Zuckerberg’s prepared testimony is that Facebook failed to protect the data of our friends from third-party app developers if our friends’ privacy settings allowed the sharing of some of their personal information. It took Facebook seven years to right that wrong. Even after doing so, Facebook allowed Cambridge Analytica to simply “certify” that they had deleted the data instead of proving they had deleted the data. “Clearly it was a mistake to believe them,” Zuckerberg said during the hearing, Tuesday.

The last, and most important thing we learn from Zuckerberg’s prepared testimony is that without the work of journalists, Facebook wouldn’t be aware of its mistakes in order to rectify them, providing just another reason for the importance of a free press. This while the government is compiling a database of journalists, where they reside, what they write and for whom in the interest of homeland security. Department of Homeland Security Press Secretary Tyler Houlton asserted on Twitter that the list is “standard practice of monitoring current events in the media,” but the list’s existence will scare aspiring journalists from the trade like similar lists scared patients from applying for medical marijuana prescriptions in Montana. I personally heard from multiple Montanans who chose to continue self-medicating their conditions with marijuana illegally for fear of being found out by the federal government as a user of cannabis.

Who is Guilty of What

A slew of Cambridge Analytica employees are likely guilty of violating the federal law prohibiting foreign nationals from “directly or indirectly participat[ing] in the decision-making process of any...political committee...such as decisions concerning the making of...expenditures, or disbursements in connection with elections for any Federal, State, or local office,” according to a complaint by Common Cause submitted to the Department of Justice.

A second Cambridge Analytica staffer said the “team handling the data and data modeling back in London was largely Eastern European and did not include any Americans.” On March 25, the Washington Post published that “Cambridge Analytica assigned dozens of non-U.S. citizens to provide campaign strategy and messaging advice to Republican candidates in 2014, according to three former workers of the data firm...Many of those employees and contractors were involved in helping to decide what voters to target with political messages and what messages to deliver to them.”

Cambridge Analytica’s “dirty little secret was that there was no one American involved...working on an American election,” Wylie said. One Cambridge Analytica document obtained by the Washington Post explained, “For the Art Robinson for Congress campaign, Cambridge Analytica SCL assumed a comprehensive set of responsibilities and effectively managed the campaign in its entirety.” The New York Times reported that the John Bolton Super PAC “first hird Cambridge Analytica in August 2014” and “was writing up talking points for Mr. Bolton.” Cambridge Analytica also “helped design concepts for advertisements for candidates by Mr. Bolton’s PAC, including the 2014 campaign of Thom Tillis, the Republican senator from North Carolina, according to Mr. Wylie and another former employee.”

Mother Jones reported the deep involvement of Cambridge Analytica staff in the management and decision-making in Senator Ted Cruz’s 2016 Presidential campaign. “Cambridge Analytica was put in charge of the entire data and digital operation, embedding 12 of its employees in Houston.”

So there’s ample evidence that many employees of Cambridge Analytica have violated the Federal Election Campaign Act prohibiting foreign nationals from participating in the decision-making process of any political committee with regard to such person’s Federal or nonfederal election-related activities. But why isn’t the Trump campaign and fellow Republican campaigns subject to punishment for hiring foreign agents to participate in American elections?

These are all Republican campaigns, supporting Republican candidates who, allegedly, want nothing more than to create American jobs and a thriving American economy. But they’re not putting their money where their mouth is. Giving more than $16 million to an analytics firm in the United Kingdom does nothing to improve the economy or create jobs in America, which is why the Trump campaign and other Republican campaigns are more guilty than Facebook and even Cambridge Analytica.

The Federal Election Campaign Act should not only prohibit foreign nationals from participating in and effecting American elections, but prohibit campaigns from spending campaign funds on services provided by foreign entities.

We can’t stop campaigns from purchasing products made outside America’s borders. Not much is produced in America anymore. But when it comes to services like catering, polling, marketing and advertising, campaign spending should be limited to those firms that reside in America in the interest of protecting the integrity of American elections and growing the American economy. It’s hypocritical of the Trump campaign to run on a slogan of “Make America Great Again” and then spend its money to grow un-American economies and jobs. Regardless of what the Mueller investigation uncovers, the Trump campaign is already guilty of selling out America.

More in this category: « Timberwolves need Thibodeau to step down as head coach The cannabis user's guide to lobbying on 4/20 »
back to top