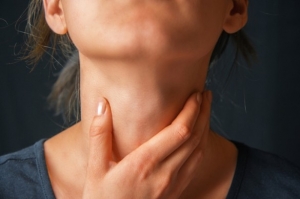 The 56 year old actress was receiving chemotherapy and radiation treatment for throat cancer.

A statement released by her husband, Steve Fleischmann, revealed she had back in 2016 woke up noticing a small amount of blood on her pillow case thinking she had bitten her tongue.  A biopsy later revealed she had squamous cell carcinoma on her left tonsil. The cancer eventually spread not allowing her to eat or drink and she required a feeding tube.  This week she died peacefully at home in bed next to her husband and the coroner revealed the cancer had spread to her spleen and brain.

According to Erin Moran’s costar, Anson Williams who played Potsie, “She kept very quiet”……”We all kept quiet too, out of respect for Erin. She couldn’t speak, but her texts were very [positive].”

What is “Throat Cancer?”

The throat, pharynx, is divided into three parts.

Nasopharynx – above the soft palate, the upper part of the throat behind the nose

Oropharynx – between the soft palate and the epiglottis, the middle part of the throat including the back wall, sides, tonsils and posterior 1/3 (back) of the tongue.

Cancer in any of these anatomical sections can be considered “throat cancer”.  Cancer of the larynx (voice box) is called laryngeal cancer and is considered separate from hypopharyngeal cancer.

Esophageal cancer is cancer of the esophagus (gullet) and is considered separate from “throat cancer” as well.

What are the symptoms of throat cancer?

Symptoms of throat cancer include:

What are the risk factors?

Risk factors for throat cancer include:

How is throat cancer treated?

As one can see by the list of symptoms, throat cancer often gets mistaken for common cold symptoms.  Unfortunately, by the time throat cancer is diagnosed, it has reached a more advanced stage.  Depending on where the cancer is located, various treatments can be instituted including surgery, chemotherapy, radiation, and targeted drug therapy.

Celebrities who succumbed to throat cancer include:

In 2010, Actor Michael Douglas successfully battled “throat cancer” that originated from a tumor at the base of his tongue. 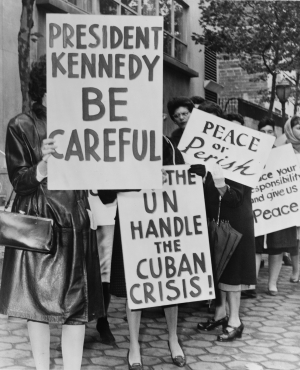 Is another Cuban Missile Crisis at hand between the U.S. and North Korea? A little history can tell us just how dangerous a nuclear confrontation can be.

Fifty-four years ago, America faced another perilous moment and was on the brink of a nuclear war. The Russians were building missile sites in Cuba, allowing the potential for an all out nuclear attack on the United States.  Younger Americans today are not aware of how close the world came to nuclear war, as historians would argue that this would become the most dangerous moment up to that time in human history.

In the fall of 1962, I had traveled to England to undertake post-graduate work in English Literature at Cambridge University.  From breakfast seminars to daytime lectures, then afternoon readings and evening tutorials, I was immersed in English literature. International politics and foreign intrigue were the furthest things from my mind — that was, until the Cuban missile crisis.

I had rented a room in the house of an English family who lived a few blocks from the Cambridge campus. Mrs. Davenport, the lady of the house, awakened me at 2:00 A.M. on October 22, 1962. She said a neighbor had just called and told her to turn on the radio to hear a major press conference by President John F. Kennedy.

It was an extremely cold morning, and there was no central heating in the house, so I grabbed a blanket off my bed, threw it around me, and went downstairs to the living room. A fire was burning in the fireplace, and the Davenport family had gathered around the radio. President Kennedy was just beginning his remarks.

The President announced a naval blockade of Cuba, which he called a “quarantine.” He made it clear that any ship bound for Cuba that was carrying offensive missiles, or any other military hardware, would be stopped and turned back.

As he ended his speech, the neighbors from next door joined us in the living room. I was not sure how serious the matter was, but there was no doubt in the minds of my British hosts, who had lived the day-in, day-out horror of two world wars; they believed that we were on the brink of another world war, and they were devastated. The women in the room were crying. Eventually, everyone turned to me and asked why the President would want to start such hostility over a minor island south of Florida. I had no idea how to respond.

The next day several members of the Cambridge Union, the local debating society, approached. They had sought me out to debate America’s actions because I was one of very few Americans at Cambridge. I knew I was in over my head, and I needed help. The only place I could think of was the American Embassy in London; maybe someone there could give me some background information about why the blockade was necessary. After a ninety-minute train ride, I was in London by mid-day.

On my arrival at the Embassy, a staffer gave me a verbal briefing and a little background information. It is an understatement to say that I was lost in the forest of international conflict.

When I spoke up for the American position and tried to defend my country that evening, I was hissed and booed by the majority of the crowd. The Russians had stated that the only missiles in Cuba were “defensive,” and that America was the villain. Try as I might, I could not convince the Brits any differently. I was up against several other speakers who rattled off numerous dates, events, and consequences of World War II and the Cold War. They were well versed in the politics of the day, and it was clear that I was less than qualified to be my country’s sole defending voice.

Cooler heads prevailed fifty years ago, under the leadership of John F. Kennedy, and nuclear war was averted.  We can only hope that President Trump can offer the same leadership on a cross section of international issues that both serve America’s interests and defuse the violence taking place across the globe. Benjamin Franklin summed it up pretty well many years ago. “There never was a good war or a bad peace.”

Jim Brown’s syndicated column appears each week in numerous newspapers throughout the nation and on websites worldwide.  You can read all his past columns and see continuing updates at http://www.jimbrownusa.com.  You can also hear Jim’s nationally syndicated radio show each Sunday morning from 9:00 am till 11:00 am Central Time on the Genesis Radio Network, with a live stream at http://www.jimbrownusa.com.