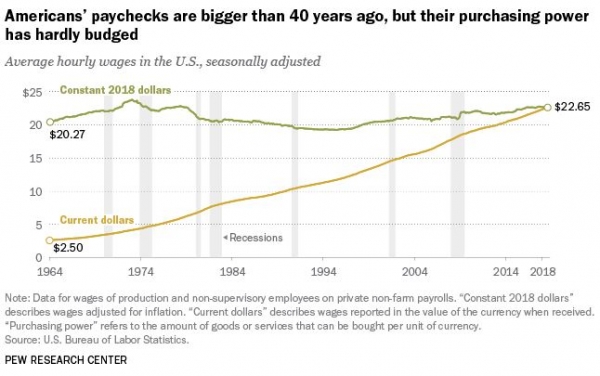 If you think the American economy is booming now, just think what it would be like if American collegians had an extra $1.5 billion to spend—especially with President Donald Trump’s tariffs set to raise the prices of imported consumer goods despite he and his administration saying the tariffs won’t result in price hikes.

Well, if prices aren’t increasing, tariffs aren’t working. The point of a tariff is to make locally produced products more attractive to local consumers by raising the price of imported alternatives. This, in theory, would result in more local production and fewer imports. But a tariff is paid by the importer of a product, not the exporter. So the 25-percent tariff Trump recently leveled on Chinese imports is transferred to the American consumers of those goods, not the Chinese producers.

The trade war isn’t taking money out of the pockets of Chinese manufacturers; it’s taking money out of the pockets of American consumers of Chinese products and Chinese consumers of American products. And since the United States runs a $375 billion trade deficit with China, the only way Trump can “win” his trade war is if Chinese economists can’t do the math to match Trump’s tariffs dollar-for-dollar. It’s even becoming more likely trade with China ends altogether. China has already cancelled planned trade talks with Trump.

It is impossible for America to run a trade surplus with China because China produces more products Americans consider essential than America produces for the Chinese, including car, computer and mobile phone components. It’s lower labor costs and Americans’ addiction to consumption allow China to perpetually have the upper hand in a trade war. If an iPhone were made entirely in America, it would cost as much as a brand new car, so while Trump might be making some American-made products more attractive to American consumers, he’s doing so at the expense of American consumers who can’t do without many of the Chinese imports found in their technology and automobiles. Even the Tesla Model 3 can only be 95-percent American-made at most.

Since Americans will be paying more for computers, mobile devices and cars, it’s not entirely unreasonable to forgive the $1.5 billion in student loan debt and allow those accepted into college two years of college education free of charge. Students and parents are going to pay more for the devices required to attend college, and colleges are going to pay more for them as well, which will be reflected in tuition costs, which will further increase student loan debt while decreasing consumers’ available income for spending in the American economy, potentially sinking the stock market.

There are other reasons besides boosting the economy for the government to payoff student loan debt. First, today’s Associate’s degree, usually obtained in two years at a community college, is the equivalent of a 1980s high school diploma. Advances in technology have made working in what is now a global economy much more complicated and necessitates further education be obtained. Students are not leaving high school with the education necessary to provide for themselves let alone a family, and it’s not their fault.

Finally, the collective credit rating of American college students, past, present and future, would receive a boost that could spur entrepreneurial growth and investment in businesses as a whole. America was the land of opportunity, where you could go from “rags to riches” with enough hard work. America used to be the best place to start a small business and be your own boss. That isn’t the case these days because despite incomes increasing for middle-class Americans, their purchasing power has barely budged since 1965. You can’t grow an economy in which most consumers have hardly more purchasing power than their grandparents did over 50 years ago, and consumer confidence in the stock market can’t increase if consumers have no means to express their confidence by purchasing stocks.